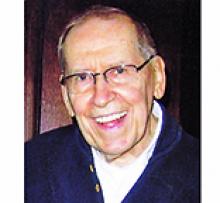 Charles Sitter of the Society of Jesus died peacefully while a young Jesuit at his bedside was quietly chanting Ubi caritas et amor on May 9, 2020, at René Goupil House in Pickering, ON. Born in Winnipeg, MB, he was the son of Sebastian Sitter and Caroline Schreier.
He was 93 years old and was a Jesuit for 75 years. He was ordained a priest in 1958. His principal ministry took place in high schools and colleges in Winnipeg and Regina. He was a highly respected spiritual guide and retreat director. He had a passion for books and art and thus became a librarian and artistic decorator for much of his life.
Funeral celebrations will be delayed to a later date.
Arrangements have been made through Rosar-Morrison Funeral Chapel (Toronto).
As your expression of sympathy, a donation may be made to the Jesuit Advancement Office, 43 Queen's Park Cres. E., Toronto, ON M5S 2C3, (416-481-9154).

Condolences may be left at
www.rosar-morrison.com