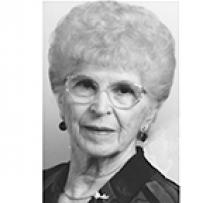 It is with great sorrow and heavy hearts that we announce the passing of Cecile Panteluk, loving wife, mother, grandmother and great-grandmother, shortly after her 95th birthday.
Cecile was predeceased by her first husband Auril (Bob) in 1996, as well as seven siblings, Alice, Irene, Lucille, Jeanne, Florianne, Lea and Therese. She leaves to mourn her second husband Alec; daughter Lynn (Rob); son Ron (Carrie); grandchildren, Charlene (Granger), Robert (Danielle), Thomas, Ryan (Romi) and Kara (Myles); great-grandchildren, Logan, Nicholas, Tatum and Olivia, as well as sisters-in-law, Rita, Claudette, May, Rose and Lucille. She will truly be missed by all.
She was a quiet woman who kept busy working and playing outdoors. Countless hours were spent at Mom and Dad's favourite get-a-ways. She loved spending time in the garden and blueberry picking. Her passion though was playing cards with her family and friends. She enjoyed the outdoors and rode her snowmobile until she was 75.
After Auril's passing in 1996, Cecile moved into Mike Sumka Place in St. Vital. During the 20 years she lived there she made several close friends and married Alec Panteluk (February, 1999).
In April 2016, Cecile decided to move into Villa Aulneau in St. Boniface. She so enjoyed speaking French regularly again. In March 2018, she needed more help and moved to Despins Residences. Thank you to all the care givers at Despins for her last few years. She loved living there so much. You have all played such an important part in her care; the kindness and the hugs she received were very much appreciated by her and us.
Our thanks also go out to Dr. Bharj and his wonderful staff at the Family Care Medical Clinic, Nancy at Northway Pharmacy, the staff at the Concordia Hospital and at Middlechurch Personal Care Home.
Cremation has taken place and a private family graveside service will be held at a later date.
For those who wish, donations may be made in Cecile's memory to the Centre Flavie-Laurent, https://www.cflc.info/en/.