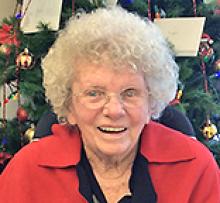 
Lilia Arnason died peacefully on May 7, 2020, at the Betel Home in Gimli, Manitoba.
Lilia was predeceased by her husband John; her parents, Kristin Johnson (née Byron) and Bergthor Emil Johnson, her uncle Kjartan Johnson; her son-in-law Glen Brooks; her brothers and sisters-in-law, Valdimar (Kristin), Olaf (Charlie), Joe (Diddy), Herman (June), Elin (Art) and Gordon.
She is survived and missed by her children, Wayne (Kathleen), William (Judy), Christine and Gary (Susan); her grandchildren, Sarah (Brandon), Stephanie, Jason (Jennifer), Jeremy (Katie), Ryan, Jared, Tyler (Sidonie), her great-grandchildren, William, Harrison, Ellis and Runa; sisters-in-law, Anna (Elert) and Josie, and brother-in-law Fredrick (Gabrielle).
Lilia was an only child growing up on Dominion Street in Winnipeg. She attended Daniel McIntyre Collegiate before graduating from the University of Manitoba with a Bachelor of Home Economics in 1946. Summers were spent in Gimli and it was there that Lilia met John Arnason. The couple dated for seven years, waiting for John to finish his degree in electrical engineering. Lilia and John were married on July 23, 1949 and she became part of the large extended Arnason family. The couple built their home next to her parents where they raised their family. As John dedicated himself to his career at Manitoba Hydro, Lilia dedicated herself to managing a home and being a supportive wife and loving mother. The family tradition of spending summers in Gimli continued. They built a cottage on 6th Avenue that they later converted into their permanent home after John's retirement in 1986. Lilia loved life in Gimli and dedicated her time and energy into her Icelandic Heritage (she visited Iceland five times), her Unitarian faith, and philanthropy. As a benefactor she generously supported many Icelandic organizations as well as others. She was an honorary member of the Icelandic National League of North America, and in 1989 was honoured to be named Fjallkona for the 100th anniversary of the Islendingadagurinn. After John's passing in 1999, Lilia moved into the Waterfront Centre as one of its first tenants. She lived there independently until 2018 when it became necessary to move her to Betel. Throughout her life she enjoyed the friendship of various groups wherever she lived.
Lilia's life spanned nearly a century; long enough for her family to benefit from her guidance, love and support but not nearly long enough as we come to terms with its end. We thank you Mom, Amma and Lang Amma. We miss you and celebrate your life.
The family thanks the staff and management at Betel for the compassionate care they gave to Lilia.
A memorial will be arranged at a later date.
In lieu of flowers, donations would be gratefully received by: Gimli Unitarian Church, Box 74, Gimli, Manitoba R0C 1B0 or The New Iceland Heritage Museum, 108-94 First Avenue, Gimli, Manitoba R0C 1B1.