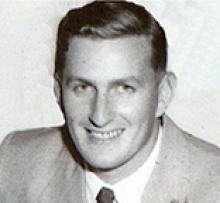 
It is with great sorrow we announce the passing of our beloved father, grandfather and great-grandfather, Norman Butler.
Left to forever cherish Norman's memory are his children, daughter Linda (David) Craig; sons, Norm (Sheila) Butler, and Ronald (Susan) Butler; 12 grandchildren, great-grandchildren, Norman's sister Muriel Laing, as well as many nieces and nephews. He was predeceased by his beloved wife Rowena, son James, sister Eileen Baverstock; and brothers, Albert, James and Gordon Butler.
Born to Everett and Annie Butler on Kensington Street, Norman was a lifelong resident of St. James. He started his first business at the age of 14, parking cars at the Polo Park Racetrack. Two years later, by now owning a truck, he hauled coal with his brother Albert. Through hard work and perseverance, his endeavors led to establishing Butler Bros. Garden Supplies in the early 1950s.
In 1953, Norman married the love of his life, the beautiful Rowena. They worked side-by-side as proprietors of Butler Bros. Garden Supplies, while raising their four children on the farm, which Norman lovingly referred to as the Ponderosa, on Saskatchewan Avenue. In the 70s, the garden supply business transitioned to Butler's Storage, his last company.
Norman was a man of many talents. He was a devoted and loving husband and family man, taking care of his parents and brothers most of his life. With Rowena at his side he ran a hobby farm, alongside several family businesses. Norman was an astute businessman, an honest broker, and appreciated by many for his shrewd advice. He was a mechanic, carpenter, and an aficionado of Johnny Cash, Cadillacs and cowboy boots.
To his children he was our hero, who made us laugh, told wild stories about trains, beat us all in checkers, and made us all jump when he played Snap. He was well loved and will be sorely missed. A successful life in so many ways.
The family extends heartfelt gratitude to Christine and the staff at Golden West Care Facility for their wonderful care and kindness towards Norman.
As per Norman's request, there will be no formal service.
In lieu of flowers, donations may be made in Norman's memory to Parkinson Canada in Manitoba, #7 - 414 Westmount Dr., Winnipeg, MB R2J 1P2.