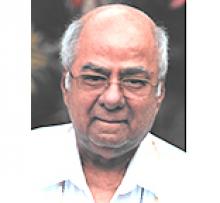 It is with much sadness that Bert passed away peacefully, at the age of 79 years, after a long and tireless suffering with Alzheimers and Parkinsons on May 9, at the Grace Hospital, without his beloved wife, Joan, at his side.
Bert was predeceased by his sons, Brian in 1991 and Darryl in 1999, his father, Alexander in Australia and his brother, Ernest (Ernie) of Winnipeg in 2013.
He leaves to mourn his devoted and heartbroken wife of 57 years, his mother in Australia and his only sister Shirley (Tony) of Melbourne Australia, numerous nephews and nieces, his many friends and relatives.
Bert was born in Akyab, Burma. He was a war baby, and he trekked with his mother to Calcutta, India in 1945. Bert met his childhood sweetheart, Joan in 1958 at the age of 18 while he was doing his five year apprenticeship in Mechanical / Marine Engineering. They were married in 1963 and were blessed with two sons, Brian and Darryl. They moved to Canada in November of 1969. Baby was it cold outside, but it did not take them long to settle down in our winters with his family in this beautiful city, Winnipeg, or 'Winterpeg' which we came to know.
It did not take long for Bert to find employment. He started working with C.P. Rail three weeks after his arrival in the Diesel Shop as a Machinist. He was a very skilled and conscientious worker moving up in his career to become a Supervisor of the Frog Shop, where he stayed for 31 years at the time of his retirement. He and Joan took over his son's Darryl's Vending Machine business, Kwik Snack Vending serving businesses in Winnipeg for 10 years.
He was a loving and devoted husband and a great father to his sons. The four of them made their first trip to Melbourne, Australia in 1986 after 17 years to visit their mothers and extended families, and thereafter made nine more trips. They enjoyed travelling and covered most of our travels to Europe, Asia, America and Australia, and in between cruised to the different islands with CAA Travel and on their own.
Bert became very involved with St. Bernadette Catholic Church and community and served in the many ministries of the Parish, with his wife Joan in the early 1980s and 1990s. He was an active member of the Knights of Columbus, Windsor Park Council since 1981, in the early 1980s he was their recording secretary and editor of the Galleon. This is where he and Joan met their closest friends. This gang of 12 eventually came to be known as the 'Twelve Apostles' and have remained friends to this day. Some have passed away, and Bert is entertaining them once again. We visualize Bert asking - "Did you put any Scotch in this glass?? It tastes like water!"
He was a member and President of the St. Bernadette's Bowling League for many years, Vice-President of the Men's Club. He was gifted with many skills and could fix almost anything from electrical to plumbing to building a garage, Bert did it all - a man of 'all trades'. Bert also volunteered and sat on the Board of Directors of the Canadian Hemophilia Society with his wife Joan in the early 1970s.
Bert was a great dancer, never missing an Elvis Presley dance with Joan at a social or wedding. It was nothing for them to entertain a group of friends at the drop of a hat, old, young and in between dancing and jiving, even though he felt he had two left legs, it came naturally. Just being with his friends, many of whom he had known since the early 1980s, enjoying the good summer months at his cottage in Sandy Hook. He was the life of any party. He was a people person, he shared many laughs and tears when he was with the friends who knew him as the 'little man' with a big heart. Bert and his wife Joan were nicknamed the 'party couple'. He never stopped doing what he loved, whether it was volunteering, or fixing fences, or chatting with his neighbours, he will always be remembered for the good acts of kindness.
Bert was a great sportsman in his school years and his love for sports was going to the football and baseball games and watching curling and hockey on TV, and golfing in the summer with his buddy Morris Subtelny.
Joan would like to especially thank the Comfort of Home Care for the wonderful service they provided Bert with the caregivers of Benny, Christian and Jonathan who helped him get through his day with much patience, understanding and care. Thank you. Joan would like to thank the WRHA, Self-Managed Family Care Program, and his Case Coordinator, Shelby McLeod for the funding Bert received through this program which allowed him to stay at home. Thank you. Special thanks to Doctor George and the wonderful nurses at the Grace Hospital in 5North with the care, patience and understanding Bert received in the short time he was in the hospital.
In lieu of flowers, donations may be made to the Alzhemier Society of Manitoba, 120 Donald St., Winnipeg, MB R3C 4G2 and Parkinson Canada in Bert's name.
"You will be able to watch a streaming mass for Bert on Thursday, May 21 at 11:00 a.m. at St. Bernadette's Parish with Father Phil. Thank you."

"Thank you for those beautiful years, through good times and sad times, we shared it all, but our love for each other always stayed strong. Will miss you my sweetheart, till we meet again, save a place in Heaven with our sons, in the Promised Land." "Rest In Peace."

Peacefully Sleeping, Resting At Last
His Weary Trials And Troubles Are Past
In Silence He Suffered, In Patience He Bore
Till God Called Him Home,
To Suffer No More