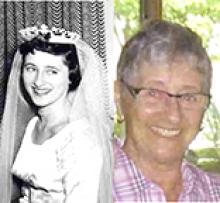 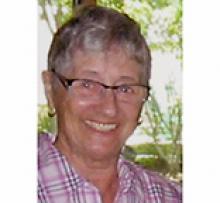 With much sadness, we announce the peaceful passing of Doreen Eleanor Tymchyshyn, on Wednesday, May 13, 2020 at the Grace Hospice, with her devoted husband and daughters by her side.
Doreen is survived by her loving husband Mike; her children, Lori (Bruce), Glen (Sandra) and Gail (Arron); her cherished grandchildren and great-grandchildren and her sister Pat. She is also survived by many cousins, nieces and nephews.
She was predeceased by her parents, Eleanor (nee Mohr) and Jack Ursel; her sister Jackie and her grandson Bohdan.
Doreen was raised in Elmwood on Talbot Avenue, the oldest of three girls, and attended Lord Selkirk School. While attending Lord Selkirk, she met her future husband Mike, whom she married in 1956.
After marriage, Doreen became loving mother to Lori, Glen and Gail. To call her a "stay-at-home" mom is an understatement, and to have her as a mom, we were blessed beyond measure. However, her true life's calling came to be with the arrival of her grandchildren whom she treasured and loved unconditionally. Our mom was happiest when she was surrounded by her family, especially her grandchildren. They will all have very, very special memories of their Grandma, including long hot summers spent at the cottage at Whytewold Beach, holiday dinners which featured the most delicious meals and baking, birthdays where they were delightfully spoiled, as well as being lovingly cared for by her while their own moms and dads were at work. Grandma always made sure to attend school concerts, musical concerts, Grandparents Day at school, as well as many other events in their lives.
The family would like to thank all of the amazing doctors, nurses, health care aids and other staff who took care of our mom and our family over the last several months.
In compliance with current restrictions, Doreen has been laid to rest in Brookside Cemetery in a private family ceremony. At this time, no formal service is being held.
In lieu of flowers, donations may be made in Doreen's name to a charity of one's choice.


Peacefully, on Wednesday, May 13, 2020 at Grace Hospice, Doreen Tymchyshyn, beloved wife of Mike and mother of Glen, Lori and Gail passed away.
A longer notice will follow.