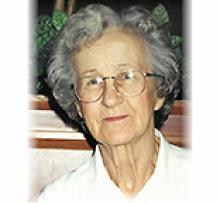 Peacefully and pain free, with her daughters by her side, our mother, Lena, passed on to the next life on the evening of Friday, May 8, 2020, at the age of 98. There is sadness in losing her but gratitude that her life came to such a gentle close
Lena was born on July 10, 1921, in Sundown, Manitoba. She was the youngest of 12 children born to parents who had recently immigrated to Canada from Ukraine. When Lena was eight years old the family moved to Selkirk, Manitoba.
Lena held a variety of jobs including working as a live-in nanny and housekeeper, in a tobacco processing plant in southern Ontario and as a sewing machine operator. She was very frugal with her money and always sent money home to help her parents. She looked after both of her parents until her father passed away at the age of 74 and her mother at 95 years of age
Lena and Stephan married in 1951 and soon after started their family. For the most part, Lena was a 'stay at home Mom'. After their children grew up and left home Steve and Lena purchased a small apartment building in 1980 and moved to Winnipeg.
Lena worked hard her entire life but there were also pleasant, relaxing times when the family would go on vacations to Radium Hot Springs, BC, and two family vacations to Hawaii.
Major highlights of Lena's life were the births of her two grandsons, Blair and Kevin. She loved those boys with all her heart and was very proud of them and their accomplishments.
Sadly, Lena's heart was shattered in March 2016 when her beloved son, Nestor, suddenly and unexpectedly passed away of a heart attack. We are certain that she was absolutely thrilled and delighted to meet Nestor in the next life.
On January 10, 2017, Lena moved to Charleswood Care Centre and lived there the final three years of her life. We would like to acknowledge the excellent care that she received there and sincerely thank the many staff members who befriended Lena and went out of their way to make her life the best that it could possibly be. Your kindness and compassion will not be forgotten.
Lena was predeceased by her father and mother; 11 brothers and sisters; her husband, Stephan; and her son, Nestor.
Left to cherish her memory are her daughters, Martha Baydak (Larry), Patricia Clayton, grandsons, Blair Clayton (Aynsley) and Kevin Clayton (Kylee), and great-granddaughters, Kaiya, Mila and Wren.
Due to the current situation with COVID-19, a very small family funeral was held on May 13, 2020, at Blessed Virgin Mary Church with interment at All Saints Cemetery.
Should anyone wish to do so, a donation in memory of Lena to foodbankscanada.ca would be very much appreciated.