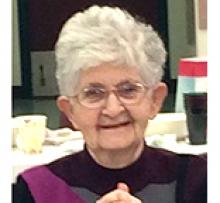 It is with sadness that we announce the passing of Marie-Ange Vodon.
She was predeceased by her husband, Wilfrid Vodon; and leaves behind a son, Henri Vodon; daughter, Therese (Glen) Niznowski; granddaughter, Jade; a sister, Odile; and numerous nieces, nephews and friends.
Marie-Ange was born May 16, 1928, in Notre Dame de Lourdes, to Jean-Baptiste and Madeleine Vuignier, and was the youngest of 21 children. She grew up on the family farm, and attended the local school, where she was an excellent student. Marie-Ange entered the congregation of Sisters of the Savior, and remained with them until 1965. In November, 1966, she married Wilfrid Vodon from Virden, Manitoba. Marie-Ange and Wilfrid farmed until 1985, at which point the family moved into a house located on the outskirts of Virden. They enjoyed gardening, visiting with family, meeting for coffee at the local restaurant, and travelling to see family and visit their children. In 2011, Wilfrid and Marie-Ange moved to a senior's residence in St. Boniface. They enjoyed getting to know their new neighbours and the staff at Villa Aulneau. They played bingo, took part in exercise classes, and attended musical evenings at the residence. Both Wilfrid and Marie-Ange were thrilled to become grandparents when Jade joined the family in 2013. Marie-Ange was a very private person, but she had a heart of gold, and loved her family. Although at first appearance she seemed shy, she enjoyed socializing with family and friends. She cared deeply about people, and hated to see injustice. When Wilfrid was diagnosed with leukemia in December of 2015, she was his protector. After Wilfrid passed away in August, 2018, Marie-Ange moved to a nursing home in Kenora, to be closer to her children. Over the years, she experienced a slow, gradual decline in memory, as well as vision loss, but she always recognized her family, remembered and missed Wilfrid, and kept her sense of humour and love of music until the end. Marie-Ange's deep faith in God brought her comfort, especially during her last years. We will miss her.
Special thanks to her older sister, Odile, for her daily phone calls to Mom. Thanks to the front-line staff at her nursing home, her respite workers, the Alzheimers Society, and the Kenora/Rainy River District Palliative Care Program, Deacon Victor and Father Allan from St. Louis Catholic Church.
Interment will be in Virden Cemetery. Funeral services will be held at a later date.
In lieu of flowers, donations may be made to Alzheimer Society of Canada.

E-mail messages of condolence or sign the
on-line Book of Condolences at www.carscaddenfuneralchapel.com