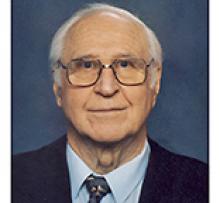 
Passed away peacefully on May 9, 2020. Ed was the last remaining child from a family of seven children.
He was predeceased by Joan, his wife of nearly 70 years, in October, 2019. Left to forever cherish his memory are his children, Eva (Paul), Marian, Randy (Bowen), Dave (Irene), Susan, and Catherine (Doug); granddaughters, Lindsay, Alison, Lauren, and Vanessa; and great-granddaughters, Jessica, Mia and Ophelia.
Ed was born in La Salle, Manitoba and was a lifelong resident of Winnipeg. Shortly after high school, Ed joined the RCAF and married Joan while posted in London, Ontario. After returning to Winnipeg, he began a lengthy career in construction and real estate. Founding his own custom home building firm in 1960, he went on to serve as President of the Manitoba Home Builders' Association. His construction days were followed by many years in real estate where he was manager of a number of offices throughout Winnipeg.
Ed was an extraordinary man. He was a devoted and loving husband as well as a wonderful father and grandfather. To his children he was their superhero who told colourful stories of growing up during the Great Depression and the Second World War. He loved music of all kinds, especially the Big Band Era, and played the guitar as well as harmonica. He had a quick and inventive way with words and created songs that kept his friends and family laughing. He enjoyed playing bridge, bird watching and sports of all kinds. He introduced his children to a wide range of sports including hockey, football, swimming, cross-country skiing and golf. He loved taking family road trips across Canada as well as the U.S. and stopped at every historical attraction and viewpoint.
When their children left home, Ed and Joan became enthusiastic golfers with a particular love for the Hecla Island course. Ed was an extraordinarily generous man showering enormous amounts of time and energy on his children and grandchildren. Ed lived a full and vibrant life and he will be sorely missed.
Cremation has taken place. While we will be celebrating Ed's life at a later date, we ask you to raise a glass to a remarkable man who won't soon be forgotten.