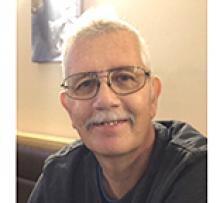 
Stephen Mark Chartrand, beloved son, brother, partner, father, and grandfather, passed away peacefully in the early morning of Monday, April 6, 2020, after a three-year battle with cancer.
Stephen - whom most knew as Steve - was born on April 30, 1960 to loving parents, Jules Chartrand and Anne Stoesz. After graduating from the University of Manitoba with a Bachelor of Arts degree, he went on to earn a decades-long career in long term personal care. Stephen's never-ending consideration of others' needs before his own made him an incredible caregiver. His passion for helping others was recognized daily, through both his work as a health care aide and his everlasting commitment to being his family's rock.
Through the countless hours dedicated to his union work, he made it his personal duty, as a representative and a steward, to fight for the protection and fair treatment of all workers. He loved world history and recounting the sagas of those who came before us - almost as much as he loved hockey and football. He was known for his kind and goofy smile, cheesy but lovable sense of humour, and remarkable ability to put others at ease.
Stephen was preceded in death only a few days prior by his aunt Jeanine, and several years prior by his uncle Guy, uncle Louis, and his mother Anne. He is survived by his loving partner Corrinne, father Jules, siblings, Lorne, Yvonne, Yvette, Caroline and Michael, his two children, Maegan (James) and Ben, granddaughter Meladee, stepfather Don, his children's mother Karen, and many aunts, uncles, nieces and nephews.
A Celebration of Life memorial service for Stephen will be hosted at a later date, after gathering restrictions for COVID-19 have been lifted.
In lieu of flowers, donations can be made to the Winnipeg Humane Society or the Canadian Cancer Society in Stephen's name.