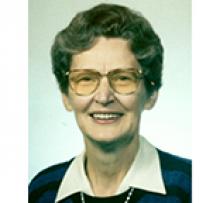 On May 17, 2020, at Donwood Manor, Mary Kasper passed away at the age of 83. She is survived by several cousins and their families.
Mary was born in Winkler, Manitoba on July 23, 1936, to Heinrich and Sara Kasper. Her parents had come to Canada in 1926 and settled on a farm in the Manitou, Manitoba area. Here she enjoyed a happy childhood and received her schooling from Grade One to Grade 12.
She accepted Christ as her Saviour in her youth and was baptized upon confession of faith and joined the Manitou M.B. Church.
Music has been Mary's love from her early years. Her girlfriend took piano lessons and one day Mary went with her, it was close to school. She liked what she heard and told the teacher she was coming next week for a lesson after school. When she came home, she told her parents. Yes, next week she started piano lessons. When the pianist in the Manitou congregation moved away, she took over at the age of eight. At 10 years of age she played at her first wedding.
She continued her lessons. When she reached Grade 10 the teacher in Manitou did not teach these grades. This then started a whole new life for the family. Mary found a teacher in Winnipeg who was willing to take her every second week, which meant 200 miles of travelling every second week. She was able to gain her teaching diploma from the University of Manitoba in 1960 in piano.
Then once the family moved to Winnipeg in 1960, she continued her studies and in 1968 received her teaching diploma from the University of Toronto in piano. While in the city, she worked for Dr. Passales an oral surgeon for four years and during her lunch break she took organ lessons and she also took singing lessons.
Gradually she started teaching piano. Over the years she had many students. A city counsellor was also a student.
In the NKMB she sang in the choir and gradually became the church pianist and organist. Later on, she also led the German Choir that went once a month to Donwood Personal Care Home to sing for the morning service. Gradually she retired from teaching students
She was also able to travel with her sisters and in 1989 went to Russia to visit Dad's sister. In 1996 she and her sister Elizabeth were able to take a tour to Israel with Fehr Way Tours.
In March of 2016 Mary moved into Donwood Manor. Here she received kind and loving care from the staff until she passed away on May 17, 2020.
Private family service held at Glen Eden Memorial Gardens.