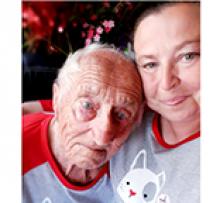 
On a Friday afternoon, just like he had finished up working, my father - best friend and mentor - left us to join his predeceased family and friends. Married to Longina, employed by Inland Steel & Forgings, one daughter Eva. Forever. He lived his life with limited concept of change, everything had to be the same. Very aware of the time, he once said that when he passes hopefully will be sudden and fast, like a clock that stops ticking. That's exactly what happened. He leaves to mourn two sisters, Helen and Julia, and brother Edward.
Thank you to Health Sciences Centre, Deer Lodge Centre Rehabilitative Services, Society for Manitobans with Disabilities, Dr. Drexler Manitoba Clinic, Victoria General Hospital, Dr. Patel Surgeon, awesome home care workers. St. Boniface Hospital had him the shortest, however I could feel in my heart that their valiant efforts to revive meant the world to him. Also, Winnipeg Fire and Paramedics. It means very much to me that he donated to Eye Bank. Those beautiful big blue eyes his vision was nearly 20/20 to the end.
He read newspaper every day and watched birds (one especially favourite squirrel) in the garden.

Born into Roman Catholicism in Wartorn, Poland, his faith was very important to him, read the bible and prayed every day. Attended Holy Ghost Church and St. Edward's.
Interment has taken place at Brookside Cemetery. Special thanks to Monsignor Maurice Comeault.