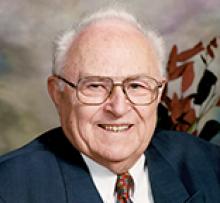 Peter Klassen died peacefully on May 16, 2020, at the age of 98.
Peter was born in Gussarowka, Ukraine on November 2, 1921, into a Mennonite family. The family immigrated to Canada when Peter was eight and settled in Manitoba. Their harrowing escape from Soviet Russia became the stuff of family legend.
Peter grew to be a man of great spiritual conviction and during the Second World War chose to be a conscientious objector, joining a work force maintaining forests and parks for the duration of the war.
Following his alternative war service, Peter married his high school sweetheart, Mary (Koslowsky) in 1945 and settled in Winnipeg.
The couple moved to BC in 1948 and lived in the Fraser Valley, where they raised four daughters. Peter was a bookkeeper for most of his working life and retired from the Menno Hospital in 1987.
Upon retirement, Peter and Mary decided to move back to Winnipeg and enjoyed spending time with children and grandchildren who lived there.
Peter was devoted to his family, his faith in God and maintaining family history by compiling information and writing a biographical account of his family dating back to the 1700s.
Mary passed away in 2004 and in 2009, Peter moved into Donwood Elderly Persons Housing. In March, 2020, he moved into the Manor.
Peter is survived by his daughters: Carole, (David Toews); Pat, (Ed Penner); Debbie; Sandy, (Dale Morgan); five grandchildren and seven great-grandchildren.
The family would like to thank Donwood Manor and especially the staff of South 2 who provided compassionate care during his final days.
A private service will be held at Friends Funeral Service on Tuesday, May 26, 2020, with interment in Brookside Cemetery.
In lieu of flowers, please consider a donation to Donwood Manor Personal Care Home.