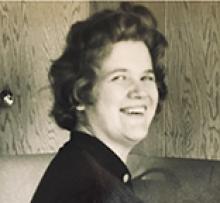 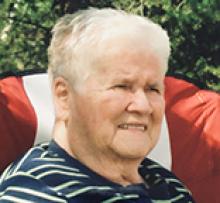 
Peacefully, on May 18, 2020, Isobel Jean Bihun passed away at Park Manor Nursing Home.
Isobel was born on August 7, 1928 to Donald and Mary Wallace. Raised in Elmwood near where her father worked at Brown and Rutherford, she attended CGIT at King Memorial United Church, the church where she was married to William Bihun in 1948. They were married for 63 years until Bill's passing in 2011.
In 1957, they moved to Transcona with their children, Brenda and David, and made a life for themselves and their family. While Bill worked at the CNR, Isobel enjoyed her decades of work at Clifford's Ladies Wear, at the store on Selkirk Avenue, on Portage Avenue, and finally at Kildonan Place.
After her retirement, she was a volunteer at Bernie Wolfe School for several years with the kindergarten and grade one kids, manifesting her capacity and enthusiasm for the support and care of children, that her grandchildren will always remember with love and appreciation. Especially at the cottage at Lester Beach, where the memory of long summer days at the beach will be an ongoing blessing. She left them an enduring teaching about taking pleasure in the simple things of life.
Isobel and Bill enjoyed many holidays in Mexico and Arizona with friends, an experience that was enhanced by Isobel's willingness and ability to learn Spanish in her fifties. They also enjoyed visiting grandchildren wherever their work or studies took them in Canada, and faithfully attending whatever events and activities they might be involved in here at home.
Isobel treasured her Scottish heritage, and was a great supporter of the Transcona Pipe Band, as a parent, and later as a grandparent of band members. When declining ability to communicate overtook her, the sound of the pipes never failed to produce a smile, and a tapping foot.
Isobel is survived by her children, Brenda (Bill), David (Anita); her grandchildren, Rebecca, Jessica, Daniel, Jennifer, Tessa, Erin and Hannah and her great-grandchildren, Robert, Owen, Noah, Emmet, Chloé and André.
Cremation has taken place and a private service will be held at an appropriate time.