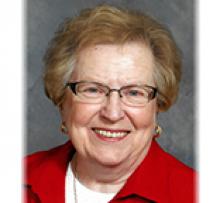 With heavy hearts the family of Helen Korban announce the passing of their beloved mother, grandmother and great-grandmother.
Helen (or Halia) was the eldest of two children born to Stephan and Tekla Budzan. She grew up in Point Douglas and attended Norquay School and later, St. Nicholas School. Throughout her life she was very involved in Ukrainian cultural events and activities. Whether it was through church, summer camps, Ukrainian dancing or singing with the O. Koshetz choir, Helen accumulated an amazing number of friendships that would endure her lifetime. In her adult years, she remained active with the Ukrainian community through various organizations such as the UNF, OYK and Catholic Women's Leagues. Her participation continued well into her 80s as she volunteered her time making perogies for the St. Nicholas Women's League and was a fixture at Folklorama's Kyiv Pavilion. Helen's Catholic faith was also very strong and she attended weekly divine liturgy her entire life.
When Helen was in her early 20s, she met a "North End" boy by the name of Martin Korban. They married on May 30, 1953, had three children and enjoyed 48 years of married life.
Helen worked for several years for the City of Winnipeg as a comptroller but, in 1977, she left to join Martin when he opened Korban Funeral Chapel. Somehow, over that time, she and Martin found time to go on several enjoyable cruises. At home, Helen loved to garden and her yard was always beautifully arranged with a variety of bright and colourful flowers and plants.
Helen's biggest joy was her family. She was especially proud of her five grandchildren and always showed an interest in their lives. Not surprisingly, food was big in the Korban household. Christmas and Easter were always celebrated at Helen and Martin's home where generous portions of delicious Ukrainian cuisine were offered. Helen was also known for her Napoleon Torte and Poppy Seed Slice. Likely, every family member has a fond memory to do with some food Helen prepared with them or for them.
Two years ago, Helen moved into the Towers next to Holy Family Nursing Home. She enjoyed having coffee with her friends who lived there. When she wasn't doing that, she was busy in her apartment making another batch of Clodhoppers or Special K marshmallow treats for her family. She would also knit shawls or enjoy some quiet time reading novels. Every Saturday daughter, Joanne, would take Helen to her weekly hairdressing appointment followed by grocery shopping and then a lunch or a coffee. Joanne will forever cherish these special times.
Helen was predeceased by her husband Martin (2001), son Richard (2017), and brother Myro (2005).
Left to mourn her passing are: daughter Joanne (Gerry), son Robert (Sheila) and daughter-in-law Donna; grandchildren, Michael, Breanne, Jay (Sophia), Evan and Stefan, great-grandchildren, Benjamin and Gabriella; and nephew Chris Budzan.
A private service was held and interment took place at Holy Family Cemetery.
If friends so desire, donations in Helen's memory may be made to the Lubov SSMI Foundation or a charity of your choice.