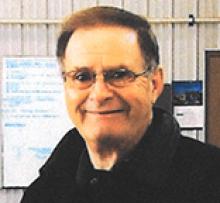 It is with heavy hearts that we announce the passing of Brian on May 14, 2020, at Steinbach Bethesda Hospital, with his loving wife at his side.
Brian will be sadly missed by his loving and devoted wife Anne, of 31 years; daughters, Shelleen (Roy) and Kathy (Glenn); stepsons, Daryl (Maria) and Ken (Shelby); daughter-in-law Rose; grandchildren, Shay, Bryce (Jocelyn), Chris, Devon (Kim), Matthew, Joseph, Melanie, Brock, Paris, Nicholas and Ryan; great-grandchildren, Landon and Sara; sister Debbie (Brian); brother Don (Gwen); and his dog Char.
Brian was predeceased by his mother Mary in September of 1989, and his father Don in June of 2016.
Brian was born and grew up in Miami, Manitoba. He left home at a very early age to pursue employment in Winnipeg. Brian was a Ford man, and to him nothing was better than a Ford. He was a hard worker, but he also played hard. He loved having a good time, and was an exceptional dancer which made Anne very happy.
Brian and Anne were married in August of 1988. At that time he was working for Canada Messenger, but later left to work with Anne in her restaurant business. They loved to travel to the Rio Grande and camp together in the summer months. In 1993 Brian and Anne opened a drive inn restaurant in Lorette (Brian's Drive Inn) and sold it in 2001. Brian also drove school bus (#24) for Seine River. In 2000 Brian had an accident on the last day of school which left him with major injuries and was unable to drive school bus or continue to work, which then lead him to retirement. In 2012 Brian and Anne moved to Paradise Village in Ste. Anne, Manitoba. They always went to the Old Tyme dances at Richer once a month, which they loved to enjoy together. As the years went on, Brian danced less and less because he was in so much pain. From January 2019 to the day that he passed his health continued to decline. This was a tough road to walk together. Rest peacefully Brian; no more pain.
The family would like to extend a special thank you to all of the home care workers that looked after Brian, and to all of the doctors and nurses at Bethesda Hospital and Ste. Anne Hospital that cared for him. You were all so great.
A Celebration of Life will be held at a later date.
In lieu of flowers, donations may be made in Brian's memory to the Heart & Stroke Foundation, or to a charity of your choice.

Brian, we will forever love you.