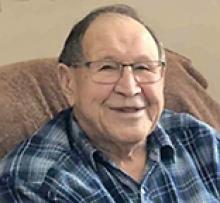 With heavy hearts we announce the peaceful passing of George Griffin on May 16, 2020, at Rosewood Lodge in Stonewall, Manitoba.
He leaves to cherish his memory his loving wife Jean, of 62 years, son Lorne (Lori), daughter Thelma (Norman) Frankemolle; grandchildren, Greg (Jenn), Jason (Michelle), Matthew (Alysia), Jeremy, Kelsey and Jarred (Leslie); great-grandchildren, Emily, Austin, Madison, Katrina, Carrera, Aurelia, Aaliyah, Kingston and Scarlett.
George will also be missed by sisters, Ruth Gee and Muriel (Don) Taplin; sisters-in-law, Gwen Griffin, Evelyn York, Eileen King and Kathleen Nichol; brother-in-law Jack (Isabel) Lawrence, and numerous nieces and nephews.
George was predeceased by his parents, Reg and May Griffin; mother and father-in-law Bert and Edna Lawrence; brother Jim Griffin; sister Elsie (Ross) MacDonald; sister-in-law Isabel (Ben) Jones; brothers-in-law, Bill Gee, Owen York, Marvin King and Ken Nichol.
George was born November 9, 1926, at Woodlands, Manitoba on the family homestead. He grew up on the family farm in Woodlands and continued farming there until he retired. He met the love of his life, Jean Lawrence, at the Oak Point sports day. They were married October 5, 1957. The following years were busy raising their two children and working side by side on the farm. First in dairy and later in beef and grain.
Retirement years were spent going to old time dances, taking trips, bowling, fishing, playing cards and helping out Norman and Thelma on the farm. Dad would help out in the community and enjoyed attending and helping out with the community functions.
Dad loved the Interlake. He spent countless hours reading history books on the various communities. Most often the car would be heading north when Dad and Mom went for a drive. Many friends were made when they attended the various functions in the small towns they visited. Family meant the world to him. He loved family gatherings, hearing what was going on in everyone's lives and watching the grandchildren play and grow up and eventually the great-grandchildren.
Dad was a man with a humble and quiet nature and always had a smile on his face. He never complained and would take what life handed him. He would assure us everything was fine and he was okay.
We would like to thank the home care workers, the doctors and staff at Stonewall Hospital; Dr. Graham and the staff at Rosewood Lodge for the care he received in the last few months.
Service to be determined at a later date.
In lieu of flowers, if friends so desire, donations can be made to South West District Palliative Care, Box 1282, Stonewall, Manitoba R0C 2Z0 or one's charity of choice.