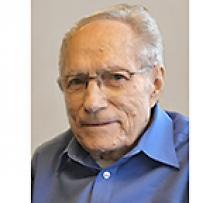 It is with sadness that we announce the passing of Bill in the comfort of his home, with family at his side, at the age of 92.
He was predeceased by his wife Cecile in 2004. He is survived by his son Lawrence (Rose); daughter Deb Walger; two grandchildren, Janessa and Lenay Walger; his sisters, Rita Laidlaw and Linda Sopiwnyk, as well as many nieces and nephews.
He was also predeceased by his brother Ray; sisters, Lily, Ivy, Jean, and his special friend Corry Olynyk (2020).
Bill was born on May 12, 1928, in Brunkild, Manitoba. Bill worked at Versatile Manufacturing for over 30 years as general foreman, and was an integral part of their success. He had many friends and acquaintances there, and told many stories of their experiences over the years.
After his retirement from Versatile, Bill started his own business, Accurate Welding, which he worked at with his brother-in-law Wally. Bill had numerous talents and skills which he used to fix and repair many things throughout his life.
In his earlier years, Bill loved to play the guitar and was part of a band for a number of years. He enjoyed going to his cabin at Lac du Bonnet, and later to his country cottage near Stuartburn where he spent many hours looking after the yard and renovating the house. He also had great memories of his many fly-in fishing trips with friends and family members.
A special thank you goes to his sister Rita, who was a great companion and helper to Bill over the last three years. Their daily afternoon visits helped their bond grow even stronger and for this we are grateful.
In accordance with his wishes, cremation has taken place. A celebration of Bill's life will be held at a later date.
In lieu of flowers, donations may be made to CancerCare Manitoba Foundation (cancercarefnd.mb.ca) or a charity of your choice.