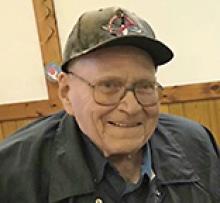 It is with great sadness we announce the passing of our very dear friend, Bill. He peacefully left us on May 13, 2020, after a short stay at the Selkirk Regional Health Centre (SRHC).
He was predeceased by his wife Norma, and is survived by four daughters, Shirley, Carol, Chris, Shelley and their families.
Above all, Bill is survived by his devoted partner Clara, who he shared 27 wonderful years with and where he gained his "bonus" stepfamily from. Bill is also survived by his daughters Gloria (Roger) and Toots; and his son Doug (Betty). He also leaves behind many grandchildren; great-grandchildren and two great-great-grandsons whom he thought the world of.
He was predeceased by his daughter Merle and son-in-law Darwin.
Bill was born on October 11, 1932, in Winnipeg, Manitoba. A hard working man all his life, he started working as a delivery truck driver for various soft drink companies in Winnipeg, where he eventually became a district manager. Bill's next adventure was in 1981 with the Western Canada Lottery Corporation where he worked as a sales representative for 13 years until his retirement in 1994. Bill was not one to sit idle and after a short time in retirement decided to join the workforce again by driving bus for Beaver Bus Lines in Selkirk until 2010 at the ripe old age of 78! Wherever Bill was employed he always developed friendly working relationships with his co-workers.
Bill was an avid fisherman and hunter. He always looked forward to goose hunting with his "American friends". Bill enjoyed the little things in life like telling a joke (and laughing until he cried), doing the Free Press Jumble, watching classic TV shows and taking his "Sweetheart" Clara for lunch, then of course, for ice cream. He loved family holidays and get-togethers, tinkering in the yard and telling stories about the "good ol' days". He was a kind and generous man with a bright, caring smile always on his face.
Bill will be missed dearly by Clara, all the family and all his lifelong friends.
The family would like to thank all the doctors and nurses at the SRHC for the wonderful care given to Bill during his time there. Also, a big thank you to Rick from Interlake Cremation & Memorial Services for the compassion shown to us during this difficult time.
Cremation has taken place and a Celebration of Life will take place at a later date.

"Gone from our sight,
but never from our hearts"