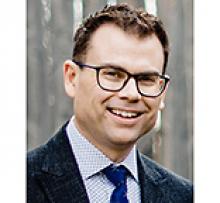 Franklin Stefan Halderson III, resident of Winnipeg, MB, formerly of Lockport, MB, passed away with family by his side on May 21, 2020, at the age of 46, after a battle with ALS.
Frank was predeceased by his father Frank Sr. and also by his grandparents, Frank and Madeline Halderson and John and Ada Todd.
Frank was a gentle, passionate man who cared deeply about his family and friends. He unabashedly expressed his feelings; it didn't take long for his nieces to give him the title of 'Best Card Writer.' He was so proud of his nieces and nephews that when he spoke of them, you would think that they were his own children. Frank loved traditions, held onto keepsakes, and had a great respect for his elders.
Frank enjoyed a cup of fresh ground coffee in the morning and a flavourful beer on the weekend. Frank had an eclectic love of music and could lose himself in music for hours. He always had great playlists ready to go.
By the time Frank was 12, he could solve the Rubik's cube in about 30 seconds; this natural logic would eventually lead him to a university degree and career based in computer science. His continued love of the cube recently inspired his nephews to learn to solve it. Frank's incredible technological knowledge made him the guy his family and friends turned to when they had any tech related questions. He was a member of the local Linux club, and spent endless hours researching topics that most people had never even heard of.
Frank had a close-knit group of friends; most of these relationships go back decades. He spent a great deal of time with their families: camping, celebrating, just hanging out looking at the stars, playing guitar, and of course, engaging in long nights of poker. He was an honourary uncle to all their children and took great joy in watching them grow.
About five years ago, Frank rediscovered the game of Dungeons and Dragons which had originally been introduced to him by his father in the 1980s. Frank became so passionate about Dungeons and Dragons, that in July of 2019, he and his brother travelled to Scotland to play the game in a 400-year-old castle. Frank spent many hours playing Dungeons and Dragons, and continued to do so until he no longer could.
Frank will be lovingly remembered by his mother Florence and stepfather Graham Wiseman, his sister and brother, Nancy (Curtis) McRae and Kris (Angela) Halderson, and his nieces and nephews, Emily (Steven) Preun, Lauryn Kolada, Brookelyn McRae, Gordie Halderson and Jack Halderson.
The family would like to thank Dr. Koko, the ALS Society, the ALS Clinic at Deer Lodge Centre, the staff at ALS House and Frank's home care workers. We are deeply thankful for the care offered by the staff at Health Sciences Centre and Seven Oaks Hospital.
Current ALS research appears to be on the verge of a breakthrough that could provide treatment for those suffering from this horrible disease. Memorial donations may be made to the ALS Society of Manitoba.

Condolences may be left on his tribute wall at
www.gilbartfuneralhome.com