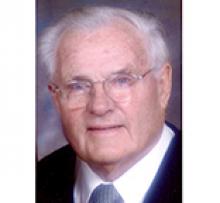 
The light left Bernie's blue eyes on Saturday, April 18, 2020. The compassion of Misericordia Place, his residence since December, allowed family members a chance to say good-bye and Dallas to stay with him till the end.
Bernie was born to Peter and Sahra (Sarah) Dyck on October 25, 1932, at Blumenhof, Saskatchewan, the fifth son of two sisters and nine brothers. Growing up on a traditional farmstead during the Depression and the war, Ben, as his family called him, learned resiliency and resourcefulness.
Bernie's father insisted he leave school after Grade 8 to work on the family farm. He eventually left Blumenhof to study welding in Moose Jaw, then worked on major construction sites in Saskatchewan and Manitoba. During one such project he met Myrna McIntyre. They were married in Brandon in 1961. Bernie will be lovingly remembered by his sons, Robert, Steve (Lori), and daughter Elaine (Shawn) Marten, along with grandchildren, Elizabeth (Ty) Cronin and Amanda (Char) Hebert.
Bernie and Myrna settled in Winnipeg and raised their family, and Bernie began his long and valued connection with CN, Maintenance of Way department. After his marriage ended, he decided to pursue his education. He completed his GED and then went on to achieve his BA in Mennonite Studies from the University of Winnipeg. He also drove for Red Patch Taxi for a few years.
Then in 1983 he joined Single Gourmet (aka Dining for Singles) and met Dallas Bagby, forming a bond unbroken even now. This brought a life and family in Columbus, Ohio, Homestead, Florida, and Litchfield, Arizona. He is survived by Dallas, mother-in-law Marilla Bagby (Frederick Bagby, 1920 to 2014), sister-in-law Marcia Niezgoda (Jay), niece Marlina Fruth (Randal), and brother-in-law Ross Bagby.
Upon retirement from CN, Bernie drove for a courier service for years. Due to his experience as a taxi driver and courier, he knew the streets and lanes of Winnipeg so well, he would advise cab drivers and even Handi-Transit on preferred routes.
Bernie was deeply committed to his church, Transcona Memorial United, and made many lifelong friendships there. He taught Grade 8 Sunday School, served on the Building and Property Committee and ushered when able. He was always an active curler and golfer with trophies and prizes testifying to his skill. He joined MSOS so he could participate in the Senior Games and continued when MSOS became CARP. He golfed with Heather Seniors and then Garden City Seniors until he could no longer play.
Bernie supported Dallas in her participation with Toastmasters, especially her time as a District officer. Later they joined the board of CARP Manitoba and became members of Friendship Force Manitoba. Travel was key in the later years, visiting all 50 states, much of Canada and the world.
Bernie is survived by brothers, Peter (Helen), David (Judy), Frank (Ruth) and Bill (Gaylene), sisters-in-law, Mary and Gail, brother-in-law Isaac Unger, and numerous nieces and nephews. Preceding him in death were siblings, Mary Dyck (Nick), John (Lois), Helen Unger, Diedrich, Jacob and Isaac, and sister-in-law Linda.
The family is grateful for all the comfort and joy provided by the St. Boniface Geriatric Day Program, Park Manor Day Program, the Alzheimer's Support Group, Access Transcona and Downtown East home care, Reliable Home Care, the Misericordia Health Centre and our Kiwanis Chateau family as Bernie lived with Progressive Supranuclear Palsy (PSP).
Cremation has taken place. A service will be held when circumstances allow.
Donations to Transcona Memorial United Church or Siloam Mission.