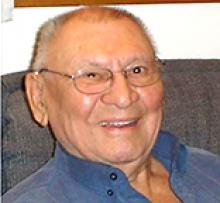 
With a heavy heart, we announce the passing of Robert Bliss Arthurson on May 26, 2020, at the Selkirk Regional Health Center.
Bliss leaves behind his wife of 65 years, Connie; his children, Jacqueline, Robert, Sherry (Wayne), Brad and Karen (Victor). He will also be missed by his seven grandchildren and three great-grandchildren. He is also survived by his sisters, Sarah, Lillian, Merdina (Percy), Ila (Doug), Ivy (Terry) and by his brother Ralph (Virginia). He also leaves behind many nieces, nephews, cousins, extended family and friends.
Bliss was predeceased by his parents, Arthur and Susan; three brothers and several in-laws.
Bliss was born in Norway House, Manitoba on January 10, 1931. In his younger years, he worked as a trapper, fisherman and forest ranger. He also worked for the Manitoba Government until his retirement. He was happiest writing songs and singing with his band members, Pat and John Mowatt, The Nelson Rivers Ramblers. Later, he enjoyed his time fishing with his grandchildren, golfing, travelling and spending time with friends. Bliss and Connie also enjoyed their time working at The Marina at Hecla Island.
In keeping with his wishes, a memorial service was held at Gilbart Funeral Home and his ashes were laid to rest at St. Clement's Churchyard.
The family would like to thank the Dialysis Team, Dr. Prematilake, Homecare providers and the many nurses and support staff at Southland Regional Health Centre for the wonderful care given to Robert.
Donations in Bliss' memory can be made to the charity of your choice.


Condolences may be left on his tribute wall at
www.gilbartfuneralhome.com.