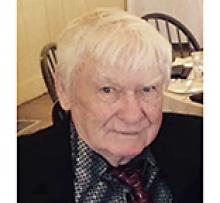 Len departed this life peacefully, in his sleep, in the early hours of May 25, 2020.
Dad was predeceased by his parents, Paul and Elizabeth; sisters, Marian and Victoria, brother Carl; beloved daughter Cheryl (John).
Forever loved and missed by his beautiful and devoted wife Lucille "Luch", of 63 years, daughters, Susan (Ernie), Sandi (Allan), Liana (Robert); grandchildren, Ryan (Kim), Jessica (Joshawa), Jestine (Andrew), Jordan, Chase (Brianne), Jenna-Rae (Chris), Julien (Sophie); great-grandchildren, Carson, James, Emma, Mya, Sophie; brother Doug (Fran); sister-in-law Ethel, and many friends and family.
Dad was an expert in the field of asphalt road paving and paved most of the highways and airports in Manitoba and Northern Ontario with Mulder Construction. After retirement Dad continued to do consultation work, going out of province to bid on million dollar asphalt plants and equipment. I worked alongside Dad for numerous summers and admired him for his strong work ethic and his long hours of dedication to get the job done perfectly. His sacrifice of working out of town during difficult conditions provided his family with a beautiful life.
Mom and Dad travelled to Hawaii, Mexico and Las Vegas often. Dad had a passion for hockey and played into his senior years. He coached his daughters in hockey at Kelvin and East St. Paul and won many city and provincial championships.
Dad enjoyed golfing at Transcona Golf Club and the simple things in life, like picking a ripe tomato from the garden or savouring one of Mom's freshly made dill pickles. Watching the birds, squirrels and bunnies in the yard brought him joy in his final years.
Dad treasured all his pets but especially his Rocky. Grandpa's eyes would sparkle with seeing pictures of his precious grandchildren and great-grandchildren. He had a special bond with Julien that death cannot change.
Cremation has taken place. A private family celebration of Dad is planned for a later date.
Family requests no visitors to the house at this time. Donations can be made to the Winnipeg Humane Society in lieu of flowers.

Rest In Peace Dad and
May God have Mercy on your Soul.