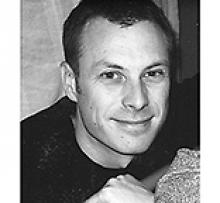 On May 24, 2020, with his children by his side, Jeffrey, aged 49, passed away at the Health Sciences Centre. Jeffrey embraced this life with a strong determination and tenacity. This virtue was inherent in every aspect of his life and his strength will be remembered.
He is lovingly remembered by his two children, Ty and Caeden; the mother of his children, Kristin; his sister Angela and brother-in-law Terry; his brother Dan; his niece and nephews, Erica, Jayse, Kyle, Barak and Nolan; his great-niece Brooke and his many friends.
Jeffrey was predeceased by his father John; his mother Rita (Hoogendorp); his brother Jack; his niece Chantelle; his grandparents, Jack and Coby Hoogendorp.
Jeff was born in Winnipeg on December 25, 1970. He resided at Actionmarguerite. Jeff was a curious, adventurous and fearless child, and as he grew, he developed the skill of attaining difficult goals he set for himself. As a young adult, he acquired a black belt in Taekwondo. He developed his artistic talents at Red River College and created many works of visual art. Subsequently, he went on to the University of Manitoba to develop his analytical skills and graduated with a Bachelor of Science and Bachelor of Education. Jeff was unable to pursue his teaching career, as his life was changed after a stroke, but his strong determination allowed him to overcome many great hurdles in his life. Jeff continued to enjoy attending and was supported by his AA group.
A special thank you to all the dedicated staff at Actionmarguerite for their compassionate care and the home they provided for Jeffrey.
In lieu of flowers, donations in Jeffrey's memory may be made to Actionmarguerite Foundation.
A private service with family will be held at a future date.