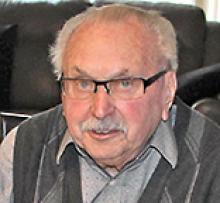 It is with heavy hearts that we announce the passing of Gérard Arbez on May 28, 2020, at the age of 91 years old.
He was predeceased by his first wife Ernestine, an infant daughter Aline and his siblings, Robert, André, Marie-Thérèse and Madeleine.
Gérard was born on March 20, 1929, to Joseph and Germaine Arbez and was raised in St. Claude. He and Ernestine raised their family in La Salle, Manitoba. Gerry always took pride in any job he did. He worked for CPR during his adult life. He also served as manager at La Caisse populaire in La Salle in its earlier years. Later in life, Gerry married Lorraine and their travels and adventures began together. Gerry was a nature lover, an accomplished woodworker, music appreciator, lifelong member of the Knights of Columbus, and looked forward to anything that allowed him to move about in a plane, train or automobile. He was happiest when surrounded by nature in a chosen travel destination. His great pride was his children, his grandchildren and great-grandchildren.
Gérard leaves behind his loving wife, Lorraine. He will be greatly missed by his four children, Gérald (Réjeanne), Denis (Bonnie), Paul (Lyn) and Joanne (Gail), his stepchildren, Paul (Carmen), Louise (Dave), Yvette (Scott) and Rosanne (Darren), along with numerous grandchildren and great-grandchildren, as well as a host of nieces, nephews and other beloved extended family and friends.
A sincere thank-you to Dr. Balko and Dr. Sinha for the continued care over the years, as well as the wonderful staff on the fifth floor of the Victoria Hospital in his last weeks.
In accordance with his wishes, cremation has taken place. A private function was held on Friday, June 5, 2020, at Mary Mother of the Church Parish, followed by interment in the St. Hyacinthe Parish Cemetery in La Salle.
One of Gerry's wishes was never to see anyone go hungry. Donations in his memory can be made to one of his two favourite charities - Siloam Mission, Winnipeg Harvest - or a charity of your choice.