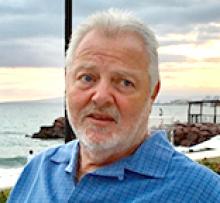 It is with great sadness and broken hearts, we announce the sudden passing of Martin Ogilvie Newlands on June 1, 2020.
He is survived by his loving wife of 47 years, Louisa, and his daughter Claire. Left to cherish his memory are his brother Hugh (Helen); sister Donna (John); brother Donald (Catherine), nieces, Diane, Elaine, Pamela, Laura and Lorraine, and nephews, Gerald, Graeme, Iain and Stephen. He was predeceased by his parents, Hugh and Robertina Newlands.
Martin was born in Glasgow, Scotland on February 18, 1953. He came from a happy family with loving parents who taught him good manners, right from wrong, and always to be kind others. When he was a young lad, he joined the Lifeboys in the church and progressed on to the Boys Brigade.
While growing up Martin's favourite sport was soccer, and he was exceptionally good at it. He had numerous football friends, one being the great Kenny Dalgleish who played for Glasgow Celtic (much to Martin's horror as he was a Glasgow Rangers fan). Martin never held it against Kenny, and Kenny went on to become manager of Blackburn Rovers and Liverpool.
After leaving school, Martin served a five-year apprenticeship as an electrician for Scott's Electricians in Glasgow's Clydeside, and as a qualified electrician for Beaton's Electric.
In 1972, Martin suffered a painful back injury and had to have surgery. However, he preferred one of his nurses to dress his wound and it was not long before a romance blossomed. Once he was discharged, they fell in love and married, Louisa married her patient. They went on to have a beautiful daughter, Claire, and in 1977, they decided to immigrate to Winnipeg, Canada. Martin worked as an electrician with Canadian Pacific Railway; a driver with Edgewood Estates, and in 1989, Project Manager at the St. Regis Hotel, and finally Project Manager at the Nor-Villa Hotel. Martin really loved his work and everyone he worked with. Nothing was ever a bother to him, and he was always happy to help anyone. A special thank you to Gilbert, Lorraine, Noele, Denys and Paul.
Martin was a proud member of the Royal Canadian Air Force 402 Squadron, Pipes and Drums. He loved his pipe band and enjoyed the many trips they made across Canada and the States until he retired, after 29 years of service. Martin was awarded the Queen's Golden Jubilee Medal. The medal was awarded to Canadians who made a significant contribution to their fellow citizens, their community, or to Canada over the previous 50 years.
He was also a member of Rossmere Country Club and enjoyed many games of golf over the years. Unfortunately, due to health issues, he was no longer able to golf, but he still enjoyed watching major tournaments.
Martin was a kind, loving husband, father, brother, uncle and friend and will be dearly missed by his family and many friends.
A private family service will be held on Monday, June 8, 2020, at 1:00 p.m. A celebration of Martin's life will follow at the Nor-Villa Hotel. Eulogy by Borys Kozak, Gilbert Gauthier and Noele Gauthier. Piper, Don Blain.
The service will be video recorded and available to view on Thursday, June 11 at https://memorials.richardrosin.ca/martin-newlands/4230146/index.php
The family would like to thank the staff of St. Boniface ICU for their care and compassion.
In lieu of flowers, donations in memory of Martin may be made to SMD, Heart & Stroke Foundation of Manitoba, or a charity of one's choice.