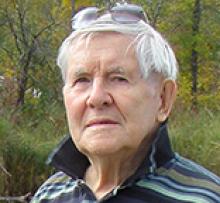 Alan Eastwood Pattison - son, brother, uncle, husband, father, grandfather, registered nurse, participant and instructor in mountaineering (Wales), rock climbing and fencing, gardener and friend - died peacefully on Monday, June 1, 2020, at Tuxedo Villa Personal Care Home, Winnipeg, Manitoba.
He was born on May 8, 1927, in Saddleworth, Yorkshire, England, to Edgar and Stella (Thornton) Pattison. After high school he joined the East Yorkshire Regiment Army in November 1944. He then served in the Royal Army Pay Corps from November 1945 to February 1948 in Egypt as part of the post war demobilization efforts. He was promoted to Sergeant in February 1947. After military service, he was offered and accepted the Royal Army's training position to become a Registered Nurse.
In 1957 he married Gillian Rhodes and together they had three children. The family immigrated to Canada in July 1967, settling first in Winnipeg, then moving to Brandon two years later, where they resided and raised their three children. Alan worked as a charge nurse and then in hospital administration at Brandon General Hospital until his retirement in May 1992. Alan and Gillian spent happy retirement years travelling in Europe, volunteering for charities, and enjoying their grandchildren.
Alan is survived by his wife, Gillian, sons, Andrew, Simon (Jill), Philip (Angela), and grandchildren, Seamus, Liam, Laura, Aidan and Aaron. He was predeceased by his parents, his brothers, Edgar, Stan, Norman, and by his granddaughter Rebeka.
Heartfelt thanks and appreciation to Dr. Robyn Olson for her outstanding care of Alan over the years, and special thanks to Dr. Olson's receptionist Wendy for all of her help and assistance. The family would also like to extend warm thanks to the staff at Tuxedo Villa Personal Care Home for their excellent care of Alan during his final few months.
Cremation has taken place at the Glen Lawn Funeral Home, Winnipeg, Manitoba. Interment will take place at a later date.
In lieu of flowers, please send donations in Alan's memory to Doctors Without Borders.
Condolences can be sent directly to Gillian Pattison, 311-2141 Pembina Highway, Winnipeg, MB R3T 5S9.