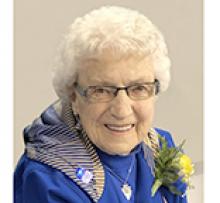 On Sunday, June 7, 2020, Edna Tarrant passed away peacefully at home, at the age of 94, after a courageous battle with cancer, with family by her side.
Left to cherish her memory are her four children: Tracy, companion and caregiver for the past 18 years, Miles (Brenda), Tim (Carmen) and Terry (Hugh); grandchildren, Sara (Matt), Stacey (Dan), Ryan (Melanie), Ian (Laura), Kyle and Kelsey (Andrew); great-grandchildren, Payton (Tyler), Tennley, Knox, Ava, Finn, James, Connor, Jordan and Kaeden. There are numerous nieces, nephews, in-laws and friends. Mom will be missed by anyone who ever had the good fortune to know her. She was predeceased by her husband, Ken; as well as all her eight siblings.
Mom was raised and lived the majority of her life on a farm in the Gunton area, until moving to Stonewall in 2002. After a few years in the Army, her and her sister, Hazel, opened a restaurant in Gunton called "Lee's Lunch", and their mother helped out there too. After marrying Ken, Edna worked hard operating a mixed farm, milking cows by hand, raising turkeys for a time, while raising four children. Mom was employed at Charison's Turkey Hatchery for several years, as well as the Manitoba Vegetable Marketing Board.
After Dad's passing, Mom enjoyed sister trips to Alaska, Nashville, California and Vegas. She had many great memories of times spent with Tracy, Pearl and family at Craven, SK. The annual spring trip to Alberta to visit family, stopping to visit who Mom called "her other daughter", Dale (Marvin), along the way was always highly anticipated once bowling had ended. Her dream of going to Pearl Harbour in Hawaii was realized at the age of 89, and her most recent adventure was celebrating her 91st birthday at Disneyworld, Florida.
Mom had a licence plate "On the Road Again", and was a dedicated grandmother and fan at many of her grandchildren's sporting events. Mom enjoyed over 30 years bowling at Quarry Lanes in Stonewall with Donna Riley and gang, where Laurie affectionately nicknamed her "E.T".
Mom loved the Winnipeg Blue Bombers, and even had her toenails painted in blue and gold. She always said she wasn't going to live long enough to see the Bombers win another Grey Cup, but was thrilled when they did last season. She cheered on the Winnipeg Jets, and proudly wore her Scheifele jersey.
Mom's wishes were that there will be no service. If anyone wishes to pay their respects, they can do so at the Victoria Cemetery, Balmoral, MB, later on.
In lieu of flowers, if friends so desire, a donation may be made to the Manitoba Firefighter's Burn Fund, P.O. Box 45001, RP0 Kildonan Place, Winnipeg, MB R2C 5C7.
Mom requested that the last line of her obituary should be words from the song by Tom McBride:

"you're going out the same way you came in"