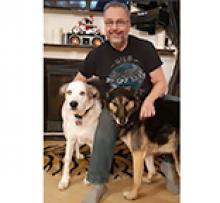 
It is with profound sadness that we announce the sudden passing of Tyrone Alzubaidi on May 14, 2020, at his home in Silver Sands, AB.
Tyrone was born May 11, 1963, in London, England and with his family moved to Canada in 1969 and settled in Winnipeg (Transcona). In his youth, this incredible man discovered his diverse talents. He was a successful professional wrestler going under the name "Typhoon Tyrone Allen". He was also a hilarious and successful comedian performing in many clubs and went on to win Yuk Yuk's Canada. A huge classical music fan, one of his true passions in his life was the piano. He taught himself to play at a young age and performed in many lounges throughout Winnipeg.
Tyrone's first job was with Shell Canada where he eventually progressed to owning his own station. After earning his BA (Honours) he began working in the precast concrete industry with companies including Genstar and Armtec. He ended his career working as Corporate Safety Officer and National Fleet Manager for Tetra Tech EBA Engineers and Scientists in Alberta.
He leaves to mourn his beloved sister Nadia (Reid) Douglas, niece Amanda; cousin Georgina Ball and Aunt Mary Kapitan; his estranged brother Angus Lebeef - formally Harith Alzubaidi; numerous relatives around the globe and many dear friends.
He was predeceased by his parents, Margaret and Usama Alzubaidi, and his niece Ashley Douglas.
A Celebration of Life will be held at a later date.

I love you so much Ty, my big brother.
Now you can be with Mom, Dad and Ashley.
Know that you will always be loved;
that Muffin and Jake are safe and happy
and you will always be remembered
for your love and laughter.
Rest in Peace.
You were an amazing person.