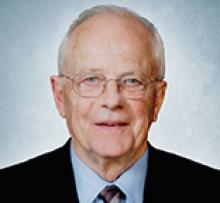 Glenn Chapman died peacefully at the Brandon Regional Health Centre on Monday, June 8, 2020, after a lengthy illness with cancer.
He was born at the Brandon General Hospital (BGH) and raised on the family farm in Brandon Hills. He rode horseback with his brothers to the East Brandon and Brandon Hills one room rural school. He developed severe hay fever in his early teens and had to move to Brandon for health reasons, staying at boarding houses while attending Brandon Collegiate Institute (BCI) High School. While attending BCI, he met a young woman named Peggy, soon to be the love of his life, who required help with geometry. His strong math skills helped her pass geometry and they started a relationship that resulted in 68 years of marriage. Following graduation from BCI in 1949, Glenn joined Laird, Sprague & Co. Chartered Accountants (forerunner of Myers Norris Penny (MNP) Chartered Accountants and was there until joining BGH in 1953. Glenn worked 37 years at BGH, which expanded to become the Brandon Regional Health Centre. He started out in accounting, completed Hospital Organization and Management courses to get his certification and progressed to managing the purchasing and personnel departments, became an executive assistant and then served as CEO for the last 25 years of his career.
During his time as CEO considerable expansion occurred at the Brandon General Hospital including the construction of the Nurses Residence, the Assiniboine Centre, the Westman Regional Laboratory and the Westman Regional Laundry which all helped create the campus of the Brandon Regional Health Centre as it exists today. Many innovations in diagnostic, therapeutic and medical programs were introduced resulting in enhanced healthcare services being made available for all of Southwestern Manitoba. The Brandon General Hospital Foundation was also established during his tenure to raise funds to support healthcare needs in the regional community.
He served on a number of Provincial and National Health boards and committees throughout his career, promoting best practices to not only improve overall medical care but to define best hospital standards. He was a leader in the development of educational opportunities for all hospital staff and in particular for those in administrative roles. Glenn was well known for his caring, respectful and common sense approach to dealing with people and problems. He was a big believer in community service and over his life time belonged to: Junior Chamber of Commerce, Toast Masters International, Kinsmen and K-40 Clubs of Brandon, Honorary member of the Rotary Club of Brandon, Co-chaired the Fundraising Committee for Library/Arts building, United Way Campaign Chairman, long time member and past President of Hobbs Manor Board of Directors and active in St. Matthews Cathedral, serving as Dean's Warden, People's Warden and Finance Committee Chairman.
Glenn loved to play bridge, golf and pool. There was a pool table in the basement that provided many lively and entertaining get-togethers. Also he enjoyed relaxing at their cottage at Clear Lake and spending time with family and friends.
He is survived by loving wife, Peggy; two sons, Geoff (Julia) of Ottawa and Allan (Rose) of Calgary; granddaughter Taylor of Ottawa; brothers, Jack (Peggy) Chapman of Brandon and Colin (Linda Faye) Chapman of Stonewall, Manitoba; sister-in-law Jean Chapman of Brandon; a large extended family in the Brandon area and two special nieces, Val Smith and Cheryl Kukurudz who provided so much love and support to their Uncle Glenn.
He was predeceased by his parents, Norman and Olive Chapman, and brother, Keith Chapman all of Brandon.
No funeral service is planned at this time. A Celebration of Life will be held at a future date.
In lieu of flowers, donations may be made to the Brandon Regional Health Centre Foundation, 150 McTavish Avenue East, Brandon, MB R7A 2B3 or to St. Matthews Cathedral Foundation, 403 - 13th St., Brandon, MB R7A 4P9.