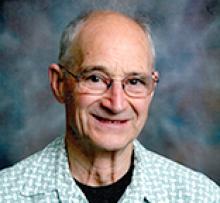 Five days after celebrating 86 years well lived, with the requisite cake, generous amounts of ice cream, and well-wishes from family in the street below his window, we sang Dad home to be reunited with the love of his life.
Predeceased by his wife Mae (McCulloch) 2008; parents, Neil and May (Nisbet) MacNair; sisters, May Braden and Isabel Rutter.
Lovingly remembered by his four daughters, Crystal (Günter Jochum), Coral (Steve Meggison), Twila (Don Smirl), Onnolee (Jamie Scharf); 15 grandchildren, Michaela (Curtis Sawatsky), Fiona, Renate, Shavaughn, Sheena (Tyler Henderson), Katie, George, Jillia, Sarah, Marissa, Abbey, Calli, Elie, Luca and Naomi; siblings, Roberta Dyck, Elsie Coates, Neil (Linda) MacNair; in-laws, Alvin (Jeanne) McCulloch and Elvira Carlisle; numerous cousins, nieces, nephews and his many friends at St. Paul's United Church, Graysville, who supported him in attending Sunday services - the one constant throughout his 86 years, and the only place that still felt familiar as dementia changed his world.
Jim was born at home in the Albert District northwest of Carman, Manitoba. When he was seven years old, the family moved to the Graysville community. He grew up on the family farm with his five siblings, just down the road from his Nisbet cousins. In 1963, he married Mae McCulloch and they took over the Nisbet farm which his grandfather had purchased in 1906. Jim and Mae had a mixed farm - grain, navy beans and cattle. They raised their four daughters in the home that his grandparents ordered in 1916 from the T. Eaton catalogue. Jim lived there until 2014, when he moved into Carman.
He was a proud graduate of the University of Manitoba Agriculture Diploma program, treasurer of St. Paul's United Church in Graysville for decades, an active member of the Dufferin Agricultural Society, and the Carman & District Farm Business Association among other community organizations.
But more than anything, he was a gentleman - a gentle man - a friendly neighbour, a kind, caring husband, father and grandfather and oh so incredibly patient.
The family wishes to thank the staff and volunteers at the Boyne Lodge and Carman Memorial Hospital for their compassionate care over the last year and a half and his friends and neighbours at Meadowood Estates.
As per his wishes, his body has been donated to the U of M for health-science education. A private family service will be held on Sunday, June 14, with a Celebration of Life to be announced at a later date.
In lieu of flowers, take time to enjoy the spring flowers and treat yourself to ice cream. If friends so desire, donations can be made in Jim's memory to the Mission and Service Fund of the United Church of Canada or to the Carman Area Foundation.