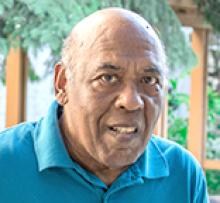 It is with heavy hearts and mixed emotions, that we announce the passing of Ramcharran Rudy Persaud of Winnipeg, Manitoba, on June 8, 2020, ending his battle with dementia. His passing was peaceful with his wife by his side.
He is survived by his wife Chandrawatie Sandy Persaud (nee Deolal), children, Anil (Christy), Timothy (Lindsay), Michelle
(Michael) and grandchildren, Jazlyn, Arissa, Paxton and Phaedra, siblings Harry "Dyal", Savitri "Violet", Marawattie "Indra", Harrynarine "Raymond", and Dhanmattie "Lila".
He is predeceased by his father Parboodial, mother Gladys (nee Khanai) and brother Rupnauth "Kenneth".
Rudy, as most knew him, was born in Whim, Bernice, Guyana. Growing up he was actively involved in his church as a youth
leader. Upon completion of his schooling, he pursued a career in teaching at Kildonan Scott School. He married his sweetheart
Sandy in 1970 and immigrated shortly after to Regina, Canada to study Biochemistry at the University of Regina. He was hired by
Chevron, which moved him to Winnipeg,
Manitoba in 1975, where he worked as a plant manager until his retirement in 1998, from Koch Materials. During his time in Winnipeg, he completed additional training in
Management at the University of Manitoba and Power Engineering at Red River College.
Rudy was immensely active in his
community. He established the Guyanese
Association of Manitoba and was President for numerous years. He coached several
soccer and football teams, always inspiring the best in his players. Rudy was an avid Blue Bombers Fan, gardener, fisherman, and
handyman. He held education in high regard, had a passion for knowledge and music, and he loved to dance.
Through his endeavours, Rudy developed lasting friendships and touched many lives. He was a friend, mentor, health advocate and inspiration to those who knew him. His
kindness and love for others was
unprecedented – he'd give you the shirt off his back, but not before telling a 10 minute story about it. His love for life was evident and contagious; he was frequently seen
opening and closing the dance floor at parties.
Rudy was a dedicated husband, father and grandfather. He had an undying love of his wife of 50 years and was immensely proud of his children and grandchildren.
He is finally free to turn up his music and dance again. Dance on Rudy! We love you dearly and will miss you.
Sincerest thanks to all the staff at Actionmarguerite, St. Boniface, and the outpouring of messages from friends and family.
Memorial arrangements remain to be
determined due the CoVid situation and will be announced at a later date.
In lieu of flowers, donations can be made to the Actionmarguerite, General Fund in
Memory of Rudy Persaud.