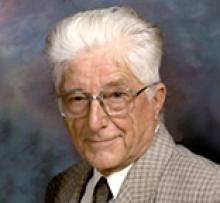 It is with some sadness that we announce the passing of our father George on Tuesday, June 16, 2020, at Donwood Manor in Winnipeg, Manitoba.
George was born November 27, 1923, in Ukraine and then was brought to Canada as a baby to start his adventures in the Elm Creek area of Manitoba with eight sisters and brothers. George was 96 years old and was predeceased by his wife Rita, son Eric; parents, Peter and Margaret; sisters, Anne, Frieda; and brothers, Nick, Peter and Henry.
He is survived by two brothers, Vic (Vanita), John; one sister Margaret; son Walter (Shirley); daughters, Lori, Sheila (Rick); daughter-in-law Anne, and then some wonderful grandchildren and great-grandchildren.
Dad married Rita in 1949, a marriage that was to last 69 years. Eric was born in 1951, Walter and Lori were born shortly after and Sheila came along as a gift 10 years later. While Dad was a solid rock of a worker as shipper receiver for Randall Plumbing and heating in Winnipeg, his passion together with his wife was in the work of the church. Dad was not only helpful in laying the foundation of the building of the Portage Avenue Mennonite Brethren Church itself in the early 60s, but some years later dad and mom became deacons and dad served throughout his life through visitation and as a practical caregiver.

His very favourite verse was John 3:16…
"God loved the world so much that he gave
his only son, so that everyone who believed
in him may not be lost, but may have
eternal life." He lived that verse.

Dad loved his family, his brothers and sisters and their families. He seldom missed an opportunity when travelling to drop in on cousins and others with whom he was in some way related. It is our hope that he is catching up on some long-lost relatives at this very moment.
In lieu of flowers, donations can be made on dad's behalf to Mennonite Central Committee.