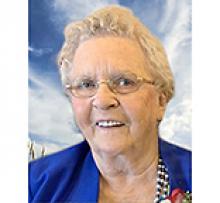 Peacefully, Lucie passed away at the age of 83, surrounded by her family at the Ste. Anne Hospital.
She is survived by her husband of 60 years, Lionel, her six children, Richard, Joanne (Marc Trudeau), Marielle (Jim Ste. Marie), Claudette (Edwin Gauthier), Normand (Kristine Raynaud) and Guy (Rachelle Lanoie); her grandchildren, Christopher, Alain, Natalie, Daniel, Monica, Roger, Crystal, Gilbert, Brittany, Serge, Sylvio, Eric, Jasmine, Camille, Colin, and 16 great-grandchildren; her brothers and sisters, Rita (David), Denise, Philippe, Marie-Anne (Henri), Felix (Adèle), Noel (Louise) and Rose-Marie (Gerald); her sister-in-law Marie and brother-in-law Edouard; her eight brothers-in-law and sisters-in-law of the Dupuis family, Denise, Paul (Pearl), Gilbert (Paulette), Ghislain (Leonne), Ginette, as well as many nephews, nieces and a large network of friends from Ile des Chênes, Ste Anne and elsewhere.
She was predeceased by her parents, Ovide Sarrasin and Marie-Flore Fillion, as well as her brothers and sisters, Arcade, Ambroise, Irene, Denis, Céline, Fernand, Leon and Ovila; brothers-in-law and sisters-in-law, Georgina, Joe, Cécile, Aurèle, Raymond and Lorne, as well as her in-laws, Rosaire and Cécile Dupuis.
Lucie was born on the paternal farm in St. Joseph, Manitoba. With a large family of 16 children, Lucie had several memories of all the tricks that played out between them. It was here that she developed her good sense of humour and work ethic that continued for the rest of her life.
In 1959 she married Lionel Dupuis in St. Joseph and they started their journey together in St. Boniface. It was there that she started working at St. Boniface Hospital in the pharmacy. She loved this experience until she started her family. In 1963 they moved to their new home in Ile des Chênes where she lived until the age of 83.
Mom was very devoted to her family by showing them how to do gardening, sewing, cooking, cleaning and her religious faith all her life. Mom later worked in housekeeping at St. Adolphe Nursing Home; also worked as manager of the Villa d'Ile des Chênes and volunteered with the Catholic Women's League for several years. Mom was friendly, warm, welcoming, tolerant, fun loving and forgave easily. What a huge example she was for her family.
At the end of January 2020, she moved to La Villa Youville. We would like to thank home care, La Villa Youville, as well as Ste. Anne Hospital for the care of our mother. Thank you also to Father Gregory and Sister Rioux for the prayers and the sacrament of the sick.
A Celebration of Life will take place at a later date.
In lieu of flowers, donations could be made to the Heart & Stroke Foundation.