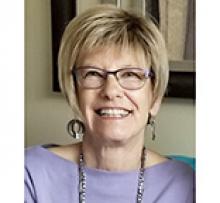 It is with great sadness that the family announces the passing of Debbie on June 17, 2020. She passed away peacefully at St. Boniface Hospital, with her loving husband Charlie at her side.
Debbie was predeceased by her parents, David and Yvonne Bell and her brother Kenneth (Kenny) Bell. She is survived by her husband Charlie; her children, Michael (Erica) and Meghan (Chris); her brother Darrell (Coral); grandchildren, Lena and Nicholas; and numerous nieces, nephews and cousins.
Debbie was born January 7, 1952, in Winnipeg.
She attended the University of Manitoba – Faculty of Education and started her teaching career in The Pas, Manitoba, teaching grades two to four, and there she met the love of her life, Charlie. They were married on July 16, 1977. Shortly after, their son Michael was born in 1979 and their daughter Meghan in 1982.
In 1989, the family moved to Australia where Debbie and Charlie were on a teachers' exchange for two years. The family returned to Winnipeg and she continued her teaching career in the River East School Division.
Debbie was passionate about singing and in 1999 she joined the Sisters of the Holy Rock, where she could sing and perform. The people and music helped her through the rough times and made the good times even better.
Pelican Lake was one of Debbie's favourite places. Memories of times spent with her parents, her family, her brother Darrell, nieces and nephews, cousins and many friends were found here at the lake.
Debbie's love of family was ever present and when she became a grandmother to Lena and Nicholas she was overjoyed.
We wish to give special thanks to CancerCare, Homecare and St. Boniface Hospital Palliative Care Unit staff. Any donations in Debbie's name can be made to CancerCare.
A celebration of Debbie's life will take place at a later date.

"Those we love don't go away;
they walk beside us every day.
Unseen, unheard but always near,
Still loved, still missed and held so dear."

The family invites you to share your
memories and leave condolences
by visiting Debbie's memorial
page at seasonsfunerals.ca