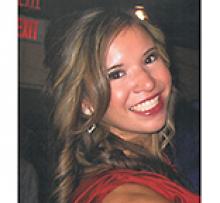 It is with extreme sadness and broken hearts we announce the passing of our daughter, Stephanie Corinne Siddle, at age 33. She fought a long and hard battle but she succumbed to her illness.
She leaves behind her parents, Allen and Corinne Siddle, siblings, Jessica, Chantelle, Shane, Christopher (Lindsay), Melissa (Jon), and her nieces and nephews, Erica and Noah who she asked about as often as she could. Also Aaron, Payten, Kaylin, Avery, Gemma, Wynter, Makayla and Larry; her grandparents, Joy Jarvis and Faye Matthewman; her Uncle Jim and Aunt Mary, and cousins, Jimmy, Tracy and Ashley.
She was predeceased by her great-gramma Ruth and grampa Jim, also her gramma and grampa Siddle, Ruth and Tom.
Stephanie was a beautiful girl, smart, fashion savvy, brave, and wonderful. She was the perfect child and the apple of her dad's eye, their bond was so great and it was evident from the day she arrived. Often they would go to listen to the Chamber music concerts. Stephanie it was an honour and privilege to call you our daughter. We had you for 33 years, what a gift. You made us better people through loving you. She participated in so many things. She danced in hip hop, ballet, jazz at Ken Peter's Dance and the Royal Conservatory of Dance. She played baseball and soccer for Gateway Community Club, snowboarded, played piano where she achieved many certificates at the Conservatory of Music, violin, flute.
Her most accomplished was her figure skating where she won many medals and ribbons for her efforts. Competing from Minot to The Pas, we had some wonderful trips. She shined on the ice. She graduated from River East Collegiate in 2006 with honours and from there went on to the University of Manitoba where she received her degree in Bachelor of Arts in psychology, even making the Deans Honour list.
Special thanks to her Gramma Joy and her Auntie Colleen and Uncle Jim who were there for her all they could. Also want to thank Auntie Colleen Mortimer for all the love and support. A huge appreciation for Brent and Gaylene Nemeth, words can't say enough. Thanks also to Andrea for all the calls and concerns. Thanks to Kari for never giving up. I would like to say a special thanks to her friends, Max, Lisa, Lauren, Courtney, Nikki and Kaila.

"Rest now our sweet angel you deserve it, until we meet again."