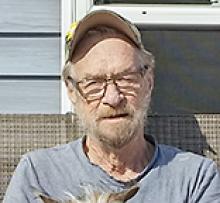 
It is with overwhelming sadness that we announce the passing of Frank Chittick, beloved husband, father and grandfather on June 23, 2020.
Frank was predeceased by his father Floyd 1985, mother Irma 2018, grandson Cameron 2018. Left to cherish his memory are his wife Carolyn; children, Scot (Betty), Sandy (Quinton), Kayla (Mathew) and Doug; granddaughter Sybrenia (Jeremy); and siblings, Brian (Sharon), Marvin (Joan), and Marlene. He will also be greatly missed by his nieces and nephews, and very beloved extended family members that touched his life over the years.
Frank was born in Melfort, Saskatchewan on March 29, 1947. His family moved to Winnipeg when he was four years old but he kept strong ties to Saskatchewan as he wore his Saskatchewan Roughriders hat and T-shirt amongst all his Blue Bomber fan friends.
Frank loved cars and driving and that led to a lengthy career as a Long Distance Truck Driver and Heavy Equipment Operator. He travelled all over the United States and Canada making lots of friends and was always there to lend a helping hand whenever needed. In 2004 he realized his lifelong dream of owning an acreage in the country just outside of Winnipeg Beach. In 2006 he decided to give up the long distance driving and went to work for Eddies Gravel in Winnipeg Beach. During the winter we spent a couple of years in Yuma, Arizona where he realized another lifelong dream and was able to attend a NASCAR race with his son Scot in Phoenix. In the last couple of years we travelled to the East Coast of Canada and the West Coast of Canada so he could say he had seen both oceans.
Cremation has taken place, a graveside service will be held in the coming weeks for friends and family.
In lieu of flowers, donations can be made to any charity that is close to your heart.

Condolences may be left on his tribute wall at
www.gilbartfuneralhome.com