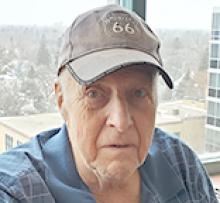 Bob passed away at Deer Lodge Centre after a lengthy illness.
He will be missed by his wife of 56 years, Jeanette; daughters, Diana (Ed), Brenda (Scott), Debbie (Greg); and grandchildren, Ryan, Ethan, Alicia, Jacob, Jazz and Tasha. Also left to celebrate his memory are his brothers, Billy (Heather), Roy (Sharon), and his sister Marie (Jack), as well as numerous nieces and nephews. He was predeceased by his parents, Gordon and Viola, and his brother Arthur.
Bob was born and grew up in Riding Mountain. After graduating high school, he enlisted in the Royal Canadian Navy for a term where he excelled at playing hockey and stepping on sea urchins. He then attended DeVry Institute of Technology becoming an Electronics Technician. It was while boarding at the Jardine residence in Toronto that he met Jeanette. They fell in love and ran away together to the Northwest Territories (with a quick pit stop in Edmonton to make it official). While in the Northwest Territories, Bob and Jeanette started their family. They eventually returned to Manitoba where Bob continued his 30-year career with the Canadian National Railway as a Telecommunications Technician and Jeanette opened her dog grooming business.
They moved to a farm near Beausejour in 1974 and Bob took great pride in running the farm for the next 13 years while maintaining his full-time job at CN. He had a soft spot for the assortment of animals, especially his Herford cattle, and a very special place in his heart for his Sheltie, Jenny. Both Bob and Jeanette commuted long hours and made many sacrifices to give their kids the incredible experience of growing up on a farm where so many great memories were created.
Bob was known for his colourful language and for being a font of knowledge. In a pre-Google era, Bob was the most reliable search engine around! Always busy with one project after another, he rarely took his own advice against being too "rammy". He did not have patience for those who were slower than the second coming of Christ and would love it if you could "p*ss or get off the pot". When he did relax, he enjoyed a nice cold beer. When really needing a beverage, he might let you know he was "drier than a popcorn fart". Speaking of farts, "did somebody step on a duck?" Yes, he was rough around the edges, but beneath was a kind heart that valued fairness in the world and advocated for the rights of the "little guy". He will be greatly missed.
The family would like to thank the staff at Deer Lodge Centre, especially Clinical Resource nurse, Zinovy.
Donations in Bob's memory can be made to a charity of your choice.
Cremation has taken place and a service will be arranged for family at a later date.