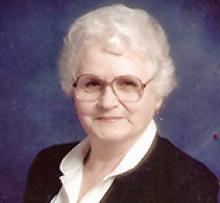 
We are all so very deeply saddened, on the afternoon of June 21, 2020, our wonderful mother, grandmother, great-grandmother and baba, Rose Diakiw, shortly after her 104th birthday, decided it was her time and left us to be reunited with her son Nick and husband Nicholas.
Left to mourn her passing are her son Len and wife Elsie, grandson Cliff, granddaughter Linda and her husband Rick, along with her other grandchildren and great-grandchildren in Edmonton.
Born and raised in the Fraserwood, MB area, she would eventually move to Winnipeg and meet her husband at the restaurant she was working at. Together they had two sons, Len and Nick, and lived most of the rest of their lives in the North End on Burrows Avenue.
How do you sum up a life spread over 104 years?
Rose was formidable and tenacious, a strong woman who worked hard all her life. During her time working for the Government, she was invited to Ottawa to represent women in Canada fighting for equal pay. Not bad for a girl from the farm living in North Winnipeg. She was an amazing cook and an even better gardener. Baba enjoyed watching wrestling and having a "shot" of her favourite beverage especially with her family. Following the passing of her husband Nicholas in 1980, she continued to live in her house up until a few years ago when she eventually moved to Holy Family Nursing Home. The last few years were a struggle and as the end approached you could see her soul was ready to enter her new life void of this crazy world. She was selfless and giving of herself all the time, whether it was love, support, guidance or help with finances - she was always there never putting herself first. Family was her priority.
This world has lost such a beautiful person and it was a much better place when you were still with us, but now it's your time Baba, no more pain, no more worrying, no more sorrow, please rest peacefully. In the words of her grandson: "I believe our souls never die, rather they transcend and live on watching over us until we are all together once again." We know you are still with us in spirit so every once in a while look in on us because we still need you and miss you terribly. We love you so very much, your family. God bless Baba Rose!!!!!
The family would like to thank Holy Family Nursing Home for the care and compassion they have shown while Mom was in their care.
A private family service will take place at a later date.