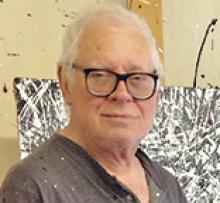 Born in Winnipeg in 1944, Arnold was raised by loving parents, Jack and Amy Leventhal. He attended Kelvin High School, then the University of Manitoba's School of Art. At 14 he went to the MOMA summer school in New York City, where he was also privately tutored by painter Lucia Salemme. Arnold left Winnipeg for Toronto in the 1970s, becoming a member of Toronto's Workscene Artist Collective from 1977 to 1979. Painting was his life's work. Like anything important, it didn't always come easily, and it didn't always bring him joy, but he was driven by a need to paint his way into a relationship with the world.
He partnered with Paula Mitchell in the late 1960s, and they were married in 1979. They spent over 50 years as partners in life, parenthood, and eventually, business; they were each other's greatest supporter, sounding-board, and advocate. Over the years together their lives were entwined by a growing love between them. For their daughter Anna, Arnold was a source of hilarity, artistic encouragement, and unwavering love and support. He was a stay-at-home dad for her first four years of life, rare for the 1980s, and the closeness of their relationship didn't fade. They never got tired of riffing on each other's jokes.
When the family returned to Winnipeg in 1984, Arnold took up work at Mitchell Fabrics. For years he served the store's diverse community locally and across Canada; with can-do resolution he helped make a safe, strong, and vibrant space on Main Street. He took great pride in the store and felt a deep loss when it closed in 2017, but looked forward to spending more time in his studio.
Arnold's sense of humour was always in play. He had a keen eye for the world's absurdities, which he could effortlessly spin. He could be cynical about humanity on the whole, but he loved people; he delighted in hearing a new perspective and easily engaged with anyone. Connection was everything to him, and he made it happen wherever he could. He had deep and abiding friendships, some lasting over 70 years, many forged more recently.
He was forward-thinking, always excited by new ideas. In 1966, Arnold and friends opened The Experiment, an art gallery and shop on Osborne Street. It quickly became a hub for Winnipeg's counterculture, leading the way for the sleepy strip to become Osborne Village. He liked to say The Experiment brought the spirit of the 1960s to Winnipeg.
Arnold had a voracious appetite for culture. His music and film collections were vast and varied, from modern to vintage, high to low; he got joy from B movies as much as from classic cinema. His bookshelf reflected deep curiosity, a wide intellect, and a passion for literature.
Many of Arnold's cherished friends were artists at varying stages of experience; he delighted in discussion, debate, complaint. He was mentored and he mentored. In the latter role he led mostly by example: be critical but kind, do the work, and always buy a bottle of wine for the table.
Fittingly, Arnold spent every day of his last week at his studio, after months of staying away due to the pandemic. He died on June 19, 2020, shortly after a sudden and unexpected heart episode there.
Arnold is survived by his wife Paula Mitchell, daughter Anna Leventhal and her partner Evan Hall, sister-in-law Ruth Ann Borenstein, brother-in-law Michael Mitchell and sister-in-law Lynne Mitchell, nieces, Rachel Mitchell and husband Jeremy Otto, Alisa Daly and husband Robert Daly, and Sara Mitchell and husband Ryan Fishman, grandnephews, Ben, Noah, Dov, Myles, and Simon, and grandniece Lyla Bea, and dear friends, cousins, and other relatives.
A memorial will be held when it's safe for family and friends to gather.
Donations in Arnold's memory can be made to Art City, a vital community organization whose work was close to Arnold's heart.
Publish Date: Jul 11, 2020


Arnold's family is devastated to announce his death, resulting from a sudden heart episode, on Friday, June 19, 2020. Arnold was in his art studio when the failure began.
A memorial event will be held when family and friends can gather safely.
Publish Date: Jun 27, 2020