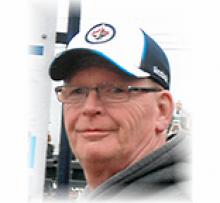 Kevin John Palmer passed away on June 23, 2020, at the age of 64, due to serious health issues. Kevin was predeceased by his mother Joan and father Bill Palmer.
Kevin is lovingly remembered by his sister Darlene (John) of Surrey BC, his brother Darren (Elda) of Winnipeg, his brother Derrick (Pam) of Kalmar, AB, his sister Valeria of Windsor, ON, and his many nieces and nephews.
Kevin was born in Winnipeg on February 8, 1956. He attended Grant Park High School where he played football and rugby. Since 2001 he worked at Buhler Versatile where he was a very loyal employee and was considered a good friend and an excellent baker by those he worked with. As his favourite hobby was baking he regularly shared his cookies, cakes and pies with his co-workers.
Kevin was a sports fan and enjoyed attending football, baseball and hockey games. He enjoyed travelling and had the opportunity to see a lot of the world. Between sports and travelling Kevin collected hats and had an extensive collection of team caps and caps from other countries.
In this last year Kevin joined My Church Winnipeg where he connected with many kind and caring people. The pastors of the church were helping Kevin through a very difficult time in his life and he was very grateful that they were with him on his journey.
A special thanks to those who stayed in touch with Kevin during his illness. Memorial donations may be made to the Cancer Foundation. Condolences from the family may be offered online through Korban Funeral Home.
Due to the COVID environment, and Kevin's wish, we will not be having a service at this time.