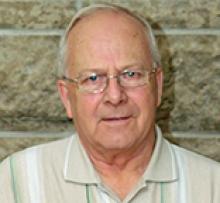 It is with deep sadness we announce that James Brian McCurdy passed away June 26, 2020.
Jim was predeceased by the love of his life Frances (Baraschuk) in 2016 and leaves to mourn his daughter Darci (Rick), son Garth (Kristin), along with his grandchildren, Rachael, Kaitlyn, Austin, Melody and Alaynna.
Jim was born in Winnipeg to a large family which included four brothers, Rudi, Ed, Alan, Bruce, and three sisters, Dolly, Heidi and Diane.
Jim grew up in south Winnipeg until his early teens when he decided it was time to try to make it on his own. He held down numerous jobs before settling into working in the printing industry.
Jim married Fran in 1968 in Winnipeg and started their life together in St. Vital before moving to Stonewall around 1975 where they spent 33 years raising their family. Jim and Fran spent time camping, bike riding, hanging out at Kinsmen Lake and spending time with his close friends on Shady Lane. They met some of their lifelong friends there and continued to stay in touch over the years.
Jim and Fran decided to downsize once the kids had moved out and moved to Winnipeg to the Courts of St. James in 2008. Even though they moved to Winnipeg, Jim remained employed at the local lumber yard helping people with their projects. It also allowed him to stay in touch with his friends from Stonewall. They continued to stay in touch with their Stonewall friends and were able to make new ones in the community in Winnipeg. After Jim retired, they would make daily visits to the Salisbury House or Perkins restaurants every day having breakfast and coffee with neighbours talking about all the important things retired people do.
Jim followed his brothers lead and spent most of his work life in the printing industry. He spent the bulk of his years at Public Press on Ellice and King Edward producing such things as the Cattleman and other UGG publications. When it was sold in the late 1990s, Jim took some odd jobs before finding a new career at Jostens Canada where Fran had been working for many years. Jim and Fran got to spend all their time together commuting, having lunch and working side by side until they retired.
Jim was an avid reader and loved mystery, spy novels and most anything he could get his hands on. He was also a very big movie and TV fan and was always the first to try new technology, like the 10-foot satellite dish in his back yard that brought hundreds of options for them to watch.
The family would like to extend a heartfelt thank you to the Winnipeg Fire and Paramedic team along with the Winnipeg Police Service. Your compassion and actions were truly appreciated.
Due to current Covid-19 regulations a private service will take place in the coming days. Should you wish to view the service virtually, please contact 204-771-0524.
In lieu of flowers, the family suggests donations can be made to the Heart and Stroke Foundation or the Manitoba Lung Association.