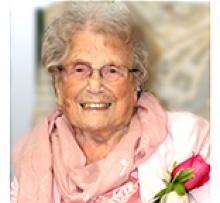 Lillian was a survivor who overcame many obstacles over her lifetime, starting from birth. She was born prematurely at home on August 2, 1919, to Ruby and Lester Tanner in Mill Village, Nova Scotia. Weighing only one and a half pounds, she was not expected to live. With no medical care nearby, she was kept warm in a shoebox on the oven door and fed with an eyedropper.
She grew up at lumber camps where her parents worked until school age, then later in the Shubenacadie area. As a toddler, she fell ill with the deadly cholera infantum but luckily recovered. Around the age of four, Lillian found herself on the wrong end of a work horse and was knocked unconscious. Again, she pulled through, but she was left with a dent in her right temple, a lifelong reminder of her third brush with death.
While Lillian loved and excelled at school, she dropped out after Grade 11 to help support the growing family, now with nine siblings. Her first job found her working in the shipping department at Lewis Company in Truro, Nova Scotia.
During the Second World War, Lillian met the love of her life, Niels Jorgensen, from Wallace Bay, NS. Pen pals during the war, their romance blossomed, and Lillian and Niels were married on November 23, 1946. They had two children, Darlene and Wilfred. Niels' re-enlistment with the Royal Canadian Air Force, meant the young family was able to travel through nine of the ten provinces; with postings in Greenwood, NS, Summerside, PEI, St. Sylvestre, PQ, Fort Nelson, BC, Rivers, MB, and Sioux Lookout, ON. In Rivers, they adopted Susan, and later Heather in Lakefield, ON.
Lillian and Niels moved to Lakefield, ON, after his retirement. Happiness, however, was not to last. Lillian was devastated when Niels was taken from her at the young age of 53 in 1974. She later moved to Winnipeg to be closer to her daughter, Darlene.
On May 24, 1980, she married Harry Hansen. Both were quite active with the seniors' groups at Gloria Dei Lutheran and St. Mary's Anglican Churches in Winnipeg. Lillian was a passionate gardener, seamstress and lover of nature and animals, especially cats.
Despite being diagnosed with Alzheimer's, Lillian looked forward to spending time with family and keeping in touch with her siblings through their letters and pictures. She moved into Golden West Centennial Lodge when her care required it but still spent weekends, later day outings, with her family until 18 months ago. On her 100th birthday, she was overjoyed to be surrounded by those she loved in a fairytale garden setting created for her.
The lockdown caused by Covid-19 was a blow for Lillian. She missed her nearly daily visits from her family and companions immensely. Unable to conquer the challenge of loneliness, Lillian's health quickly declined.
Lillian will be greatly missed by her daughter Darlene, husband Gen, her grandchildren and their families: Tania, husband David, great-grandchildren, Taeven and Desmond; Anthony, wife Jessey, great-grandchildren, Kayleigh, Isabella, Christian and Chiara. She also leaves to mourn her son Wilfred, wife Joyce and their children: Patricia and Wendy, husband David; daughter Susan and her children: Amanda and Erin; daughter Heather, husband Rolly and her children: Ariel and Andrea, husband Justin with Felix and Julian.
She is survived by her younger siblings: Helen, Barbara, Marion, Marilyn, husband Dick, and Harold, wife Elza, who will grieve the loss of their oldest sister. She was predeceased by brothers, Fred, Stan, Dan, sister Dolly, and her parents, Lester and Ruby Tanner.
We extend our sincerest gratitude to her friend and long-time companion, Lorraine and her husband Marvin, who treated her like family, and to Sandra, who had recently joined us in caring for Lillian.
The 5th Floor nurses and health care aides must also be commended for their exemplary care over the last eight years! We are especially grateful to the 5th Floor team leader Jacqueline's leadership and Dr. Karen Moran de Muller. Thank you to spiritual advisor Major Brenda, hairdresser Vidaya, dietitian Sonya, recreational, housekeeping, dietary and administrative staff who contributed to her care and active personal lifestyle. Our sincerest gratitude to evening supervisor, Evelyn, who guided us through Lillian's end of life care. We were blessed to be able to visit with Lillian at the end and see her joy at being reunited with her family.
Lillian died peacefully on June 28, 2020, with Darlene, Tania and Anthony at her bedside.
Funeral arrangements, with interment beside her beloved Niels at Lakefield Cemetery, will be arranged by Chapel Lawn Funeral Home. Due to the COVID-19 pandemic, no funeral service will be held.
In lieu of flowers, please consider a donation to Golden West Centennial Lodge, 811 School Road, Winnipeg MB R2Y 0S8 or a charity of your choice.