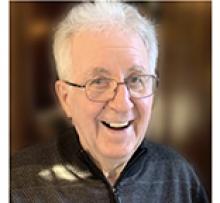 With sadness we announce the peaceful passing of Jerry Wayne Anderson on June 24, 2020.
Jerry was predeceased by his parents, Ruth and Norval Anderson, mother-in-law Sina Clegg, and niece Renate Halozan. Remaining to cherish his memory are his wife Rose; daughter Lisa (Jason) Yaskiw, granddaughters, Krista and Addison; son Mark (Laura) and granddaughter Rylynn; sister Shirley Halozan; brother-in-law and sister-in-law Lloyd and Lorna Clegg, and Murray and May Robins, and many loved nieces, nephews and cousins.
Jerry was born in Goderich, ON on December 31, 1939. Jerry's excellent work ethic began while growing up in Toronto working many different jobs. In 1960, Jerry became a proud member of the RCMP, serving for 25 years in many locations throughout Manitoba and Kenora, ON, retiring as a staff sergeant. In 1985, Jerry began his second career, which spanned 15 years, with TD Bank Corporate Security. In his final retirement, his special job each fall was guiding in Churchill for Frontiers North Adventures, a job he loved.
Jerry led a life full of activities and hobbies that brought him great joy. Actively, he enjoyed biking, fishing, hockey and baseball and - in his later years - weekly boxing with his Parkinson's Rock Steady group. Another activity Jerry enjoyed was the time spent with the retired RCMP and TD Bankers coffee groups, special thanks to Errol Flynn and Denny Booth. His hobbies focused on his love of nature and everything wildlife; especially bird watching, photography, but his greatest passion was polar bears.
Above all, he was a devoted family man. His wife, children and granddaughters came first. Rose was the love of his life for 51 years, he was proud of his children, Lisa and Mark and all of their accomplishments, and his granddaughters - Grandpa's girls - were his greatest treasure.
We wish to give special thanks to Dr. Raubenheimer, Dr. Borys, Dr. Dhaliwal, the SICU team at Health Sciences Centre and the GA5 neuro ward.
A private interment and Celebration of Life has already taken place.
In lieu of flowers, donations in Jerry's memory may be made to Parkinson Canada, #7-414 Westmount Drive, Winnipeg, Manitoba R2J 1P2. Online donations can be sent to: www.parkinson.ca

To Those I Love and Those Who Love Me
I Am With You Still
I give you this one thought to keep
I am with you still - so do not weep.
I am a thousand winds that blow
I am the diamond glints on snow.
I am the sunlight on ripened grain
I am the gentle autumn's rain.
When you awaken in the morning's hush
I am the swift uplifting rush
Of quiet birds in circled flight
I am the soft stars that shine at night.
So do not think of me as gone -
Know I am with you still - in each new dawn.