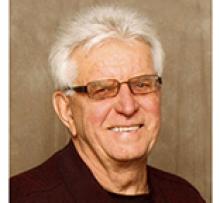 My journey here has come to an end. I have had many good times. I sadly leave behind to cherish my memories my wonderful wife, Glenda, brothers, Mel (Jane), Bernard and Randy, sister, Brenda Campbell (Chuck), brother-in-law, Lyle Plett (Eliza), sister-in-law, Donna Anderson (Duane), sister-in-law, Bonnie Holod, along with many nieces and nephews. Predeceased by parents, George and Catherine, sister, Carol Bell, brother-in-law, Jim Bell and brother, Reg.
I was born to George and Catherine Holod (Rainkie) at Elk Ranch, MB on the edge of Riding Mountain National Park. The most beautiful country in Manitoba. I completed my schooling in Neepawa where I participated in hockey and baseball. I was part of the first organized little league baseball team outside of Winnipeg. In 1955, I began a lifelong career with MTS now known as Bell MTS. Retiring as Service/Construction Manager for the Winkler area in 1993. With MTS I travelled the length and breadth of Manitoba from Ontario to the Saskatchewan border and from the US border to Churchill. If I could have turned back the clock, I would have done it all over again. Where else could one work and get to travel the entire province of Manitoba and get paid for doing so? As well as meeting exceptional people along the way like Gordie Temple and countless fellow employees. In 1975, I became a member of Westwood Royals fastball team in the Crestview men's league. In 1977, the Westwood Royals won the league championship. We were known as the Cinderella team. It is the only Westwood team to win the championship. I subsequently met Gary Gillis with whom I have had a lifelong friendship. Gary also introduced me to my hunting and fishing buddies from Glenboro. Ken Lalonde, Ken Cullen, Butch, Howie, John, Armand and the Jeffery clan with whom I have hunted and fished with since 1975, 45 years.
In 1988, I married the love of my life, Glenda. She was my best friend and companion. We shared many happy years together travelling, golfing, hunting and fishing. The years we spent together were the best of my entire life. I loved her and I know she will miss me and now she won't have anyone left to tell her what to do or how to do it since I was the best MacGyver of all time. In 1992, along with my wife, we started K & G Enterprises, a used car business which allowed me to meet many people from all walks of life and created many friends along the way.
I also had some great times and some turbulent times golfing with "Shaker", Herb and John. How good would Herb have been, if he could only "putt". My memory about events, dates and names was truly admirable, I never forgot a name. I lived a good life. Couldn't have asked for anything more. I will also miss my hunting buddies including the Jeffery's bunch. I had great times with the royals and the hunting gang which Gary called (Hootin Nannies). I hope I will be missed by many.
The family wishes to express their deepest gratitude to the paramedics, doctors, nurses of Boundary Trails Health Centre for their kind, respectful and compassionate care. Donations may be made in Kas's memory to the Boundary Trails Health Centre Foundation, Box 2000, Winkler, MB R6W 1H8.
Cremation has taken place and ash interment will take place at Chapel Lawn Tribute Niche, 4000 Portage Ave. in Winnipeg at a later date. Due to Covid-19 restrictions of no more than 50 people indoors, only invited family and friends may attend.