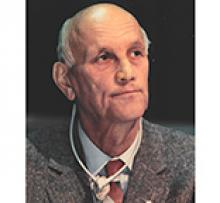 It is with great sadness the Rodie family announces the passing of our father John "Jack" Rodie on June 30, 2020.
Dad was born September 27, 1926 in East Braintree, Manitoba. Dad was predeceased by the love of his life, Helen "Betty" in 2010. Dad and Mom were married for 59 years.
He was also predeceased by his parents, Krist and Katrina Rodie and his brothers, George, Sam, Acardie and Allan. He is survived by his children, Diane Behr, Douglas (Janet) Rodie, Karen Hill (Jim Clark), Ken (Barb) Rodie, Tanis (Anthony) Magnifico and Michael (Orissa) Rodie; numerous grandchildren and great-grandchildren.
Dad is also survived by his sister Irene Rossman.
He attended the one room school in East Braintree, which he often referred to as the University of East Braintree.
Dad started working in 1948 with the City of Winnipeg Greater Winnipeg Water District. He started out as a water boy for the steam engines and worked his way up to shop foreman retiring in 1988.
Dad was one of the founding members of CUPE local 500 and very well respected for his commitment to the union movement. He remains the longest serving CUPE President from 1965 to 1981. He also served for 10 years, 1975 to 1985 on the national executive board and as a senior representative on the Manitoba Executive Council of the Federation of Labour as secretary treasurer. Dad also served on many other boards, CancerCare Manitoba Foundation, Health Sciences Centre Foundation and the Manitoba Pharmaceutical Association College of Pharmacists.
Dad was a long time resident of St. Vital and a proud member of the New Democratic Party. He was very active in the St. Vital Constituency Association. He was a great mentor to his children and his union family.
Dad was never too busy to stop and chat about the history of CUPE. After Dad's retirement in 1988 CUPE Manitoba established the Jack Rodie Award which is presented annually to a CUPE member who displays a long-term commitment to the union movement.
One of Dad's favourite pastimes was to tinker in his garage creating beautiful works of art, welding plant stands and tables which he donated or were auctioned off to raise money for charity.
The family would like to thank the WRHA home care workers, palliative care staff and caregivers, Hermie, Tess and Sunny and Ed. Without his caregivers Dad's final wish to pass away in his house with his beloved dog MIA would not have been possible. Dad always told us that he would only leave his house feet first out the back door, which he did.
Due to COVID-19 restrictions, a celebration of Dad's life will be held at a later date.
In lieu of flowers, donations to CancerCare Manitoba or a charity of one's choice would be appreciated.