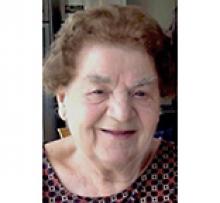 Vicky, our dear mum and nana, passed away suddenly in her own home, at the age of 84 years.
Vicky will be greatly missed by her daughter Cheryl (Jim Corbett); her grandchildren, Dominique and Erin (Aaron) Corbett; her sisters, Olga Sirman, Anne Burgess, Helen (George) Lawson; and brother Steve Glowach, and many nieces and nephews. Vicky was predeceased by her husband Tony (Antoine) Bouvier; her son Mark; and sisters, Pauline Glowach and Stella Kazimir.
Vicky grew up in Okno and Arborg, and moved to Winnipeg, where she worked at the Manitoba Clinic. She met the love of her life Tony at an Interlake barn dance, and they married in 1958. In 1965, they moved to Teulon, where Tony partnered with his brother and father to start a family business. When Tony passed away suddenly in 1967, Vicky became a single mom and reentered the work force, first working many years at Bouviers', then later at Northern Goose, working hard to support her young family.
During this period, she also had major vision loss due to macular degeneration, developing a significant visual impairment. She lost her son Mark suddenly and tragically, at the age of 21. Despite this rocky path, she carried on with determination and a fierce independence. Vicky flourished during her retirement, truly her golden years. She loved travelling with friends to many seniors' functions throughout the region to dance the afternoon away to live music. She loved visits to Kenora to spend time with her grandchildren, especially summers at the beach. Her church community and friends were very important to her. She was actively involved with church fundraising activities, making so many pies and perogies, until her health began to fail.
We are all so grateful to her church community and friends, to her home care supports, to her Pharmacy team and all the other services that helped to support Vicky so that she could continue to live independently on her own terms, in her own home, where she most wanted to be.
Due to Covid-19 restrictions, a private service will be held.
In lieu of flowers, donations may be made in Vicky's memory to St. John Vianney Church, Teulon (c/o P.O. Box 1159, Stonewall, MB R0C 2Z0), or to the St. Boniface Hospital Foundation, Winnipeg.