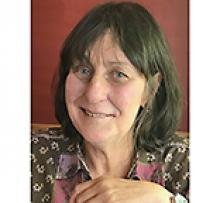 
The second of three children born to Hersh (Harold) Markusoff and his wife Violet (née Kankewitt), Carol was adored by her older sister Lynda and in turn they doted on the youngest, their brother Alec (Buddy). Growing up in Garden City in Winnipeg's north end was a perfect fit for this tight knit family. Extended family lived nearby and many lifelong friendships started there too.
After earning her B.A. in Anthropology at the University of Manitoba Carol moved to Toronto to attend Ryerson Polytechnic University where she earned a B.A. in Urban and Regional Planning. Following her education was a long serving career in public service.
In 1986, through a mutual friend, she met James Botaitis and thus began their decades long love affair. Together they raised a golden four-legged girl with Labrador heritage named Floppy. In 1999, longing to return to her roots and her family, the trio moved to Winnipeg and bought their first and only home in Wolseley. On returning to Winnipeg Carol continued her career in public service with the Manitoba Ombudsman. She retired from public service in 2013.
The family that welcomed Carol back to Winnipeg from Toronto included her widowed mother and her siblings and their families. Lynda with Sheldon Rosenstock had two daughters, Hayley and Mauri. Buddy with Lori Cariou had son Benjamin and daughter Rachael. Carol could not get enough of her nieces and nephew. A few years ago Hayley and Adam Russell had a son Levi, and Carol loved adding great-auntie to her resume.
Carol had a twinkle in her eye and a smile that would light up a room. Her dry wit would often catch people off guard and in particular James who after 34 years was still never quite sure. She loved words and language, her garden and riding her bicycle. Carol was fiercely supportive of and loyal to anyone she was close with.
Carol's illness was sudden and unexpected. With the support and our thanks to the St. Boniface Hospital palliative care team Carol was able to spend her final days with James in the home they made together. There was a constant stream of family, friends and neighbours through that house in the final weeks including Linda Paquet, Erin Carr, Chris Harrysingh and Carol's two oldest and dearest friends, Judy Globerman and Maureen Perlmutter.
Surrounded with the love of her entire family and with her spouse James at her side, Carol Shayne Markusoff passed away on July 4, 2020.
Carol's favourite charity is The Dream Factory. A Manitoba-based charity dedicated to fulfilling dreams for kids who are battling life-threatening illnesses. thedreamfactory.ca
Carol had a final message for everyone. It is in the form of her favourite song. Wake Up Everybody by Harold Melvin & the Blue Notes with Teddy Pendergrass. Available online. Please be sure to give it a listen and think of her.