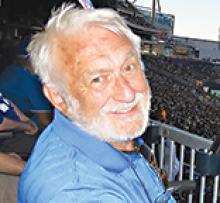 
Elmer George Hywarren of Grande Pointe, Manitoba passed away peacefully in his sleep on Tuesday, May 5, 2020.
Elmer was born in Sudbury, Ontario on April 16, 1941, and spent his youth - literally - in the shadow of INCO. He attended Nickel District Collegiate and enjoyed working as a camp counsellor at the Mine Mill Camp and as an underage movie projectionist at local Sudbury gatherings. Thus began his love of cinema, and the beginning of what was to become an incredible lifelong catalogue of films that he had seen. He grew up in a household where the realities of the labour union movement were experienced firsthand, and often expressed in folk music: his second enduring passion. Atypically for men of his age in Sudbury at that time, he chose a different career path: that of electronics and broadcasting. First with CKSO in Sudbury and then CFTO in Toronto, Elmer worked in technical production of the emerging private television industry.
In 1966 Elmer accepted a position with Instructional Media at the University of Manitoba, leading his young family to what they embraced as their new home: the Prairies. With relatives in Ontario and across Western Canada, every summer was typically spent in a Volkswagen of some make and model visiting family and exploring our country - and beyond - from coast to coast. Whether along the familiar length of Highway 17, or cruising toward the Continental Divide, Elmer was happiest behind the wheel: his love of road trips and the joys of seeing family and old friends across Canada was always close to his heart.
Over the course of his four-decade career at the University of Manitoba, Elmer enjoyed meeting and working with faculty, staff and students in a number of disciplines and on several special projects. Elmer was particularly proud of his pioneering work in distance learning for remote communities in Manitoba. Incurably curious and always willing to learn, Elmer was passionate about education and was always seeking ways of sharing knowledge with those he met. In retirement, Elmer was happy to serve as a local School Trustee.
As was the case with so many residents of Southern Manitoba, the Great Red River Flood of 1997 was a seminal event. From the sand-bagged family home in Grande Pointe, Elmer was not hesitant in expressing his views on the circumstances at hand and the devastating impact on friends and neighbours. That commitment to the long-term well-being of his immediate community was why he chose to successfully stand for election as a Councillor with the Rural Municipality of Ritchot.
Elmer was a Bomber fan forever, and was just as happy listening to the games on the radio as he was watching them on TV on the back deck, or seeing them in the stands with family and friends.
Elmer is missed by the love of his life Mary Ann; his children, Aaron and Natasha; their spouses, Christine and Corbin; and his grandchildren: Tatianna, Callum, Evelyn, and Keegan. Though he doted on his grandchildren - teaching them everything from how to drive the tractor to making sling shots - he never spoiled them: he reserved that privilege exclusively for Chelsea… the family dog who never tired of her walks down to the river or car rides with the promise of ice cream. Elmer is also missed by brothers and sisters, Ernie, Terry, Tom, Dennis, Cynthia, Robert, and Bev; their spouses and children across the country; and, by the extended Hupalo family.
The family would like to thank neighbours and the unsung heroes at Saint Boniface Hospital for their incredible support over the past months.
Elmer was too funny and irreverent to want a formal memorial service. As such, a small informal Celebration of Life - with a virtual element - is planned.
Donations to the University of Manitoba President's Fund or the St. Boniface Hospital Foundation are encouraged.