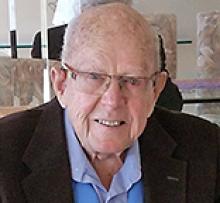 
It is with profound sadness that Bill's family announces his passing. He was 92 and still enjoying life as much as possible, spending time with family, driving to the beach to read his book, or to the golf course for practise or play.
Predeceased by his father and mother, H.E. 'Pete' and Lottie Riley, sister Joan and brother-in-law Jack Martin, and his beloved wife of 64 years, Norma (nee Jamieson); he will be lovingly remembered by their children, Jane Green (Daniel), Margaret Cody (Neil), Barb Riley, Jim Riley; and by his grandchildren and great-grandchildren, Brady Green (Stacey and Hilary), Ryan Cody, Carolyn Cody (Ian), Laura Green (Simon), Veronica Schober (Bradley and Charlotte); nephews and nieces, cousins, and his many friends.
He was born in Calgary, Alberta, and lived in Hardisty, Bassano, Brooks, Lacombe, Leduc, Redwater (and many other small Alberta towns while working on drilling rigs), Vancouver, Norman Oklahoma, Edmonton, and Calgary, before settling in North Vancouver, BC. He attended Mount Royal College in Calgary, did his undergrad studies in Geology at UBC Vancouver and was on the swim team there. He continued his education at the University of Oklahoma in Norman, Oklahoma in Petroleum Engineering, and worked in many capacities in that field in Alberta from youth to adulthood before opening his own engineering company, Cougar Industrial Ltd. in Burnaby. He proudly wore his Professional Engineers iron ring throughout his life and was a wizard with a slide rule.
On family driving trips he was known to stop the car so we could admire interesting rock formations, he taught us how to play chess and cribbage, to fly fish, and ski in nearby Banff. Always athletic, he excelled at snooker and many sports including hockey and curling. Bill was a wonderful dancer and enjoyed learning languages, especially Spanish. He was a member at Quilchena Golf and Country Club in Richmond for many years, and created a 'jungle golf course' in the garden of our family home to the delight of all the grandchildren who fondly remember playing mini-golf with him. Golf was a passion as was travel, and he was proud of the fact that he and Norma had visited 133 countries. After retirement, he sang with the Greater Vancouver Operatic Society for many years, volunteered at the Vancouver Aquarium, and had been a member of the False Creek Yacht Club and Vintners of North Vancouver. He was also a member of the Royal Canadian Legion. During his lifetime he enjoyed scuba diving in the tropics and was featured in the local newspaper beside his towering banana plant in their garden.
We would like to thank all the medical people who have cared for him over the past few years when needed, and the staff and residents at Westerleigh Parc in West Vancouver where he lived, for their kindness and friendship.
No memorial is planned at this time.
The family gratefully declines to receive flowers and asks instead that Bill be remembered with a donation to the BC Cancer Agency as he was also a cancer survivor.

We all miss him terribly;
he loved his large family
and favourite dog, Maebe.